If you’re looking at buying an unlocked iPhone 5s, iPhone 5c, iPad Air, or iPad mini with Retina Display this year and are expecting to pay full retail–not subsidized–pricing for those models, it may be best to look at Verizon’s hardware over the standard unlocked model, regardless of which carrier you want service with.

The reasoning here is that Verizon’s models of the 2013 cellular-enabled iOS hardware will allow users to readily swap out the nano SIM card and either use Verizon’s, AT&T’s, or T-Mobile’s voice and/or data service in the U.S. The Verizon hardware is also fully unlocked, so if you travel internationally, you should be able to roam onto a GSM or CDMA network, or even use a local domestic SIM and avoid paying roaming charges.

This could be an important consideration for holiday shoppers who want to gift an iPhone or a cellular-enabled 2013 iPad model to their loved ones, but may not be sure what cell service the recipient of their gift uses. 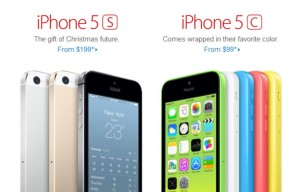 Choosing Verizon’s iOS hardware will give you the most flexibility for the future over choosing a standard unlocked iOS hardware. While choosing one carrier today may suit your needs now, in a few months or a year or two, your needs may change. T-Mobile’s service today may be great, but a year from now if you move to an area without T-Mobile coverage, you may find yourself longing to switch to Verizon. And Verizon’s service today may be awesome, but if you find that your job moves you to a major city, the carrier’s 4G LTE speeds may be lackluster and you may be itching for AT&T’s service in major metropolitan areas.

READ: iPhone 5s: Which Carrier Is the Best?

In contrast, the unlocked GSM model will readily work on AT&T and T-Mobile’s 3G and 4G LTE services, but don’t expect the unlocked phone to work on Verizon. The main reason is that Verizon’s 3G CDMA service is locked down and you won’t be able to use an AT&T iPhone to make a voice call on Verizon’s network with a Verizon SIM card attached.

While most Americans won’t be frequently swapping SIM cards between any of those two or three carriers unless you have active SIM cards and services on multiple carriers, if you do change service the Verizon hardware will serve you best. For people who may have a Verizon account for work and an AT&T account for personal use, you can pop in your Verizon SIM during the day for work and when you get home you can swap to AT&T service and use the same hardware as another example.

Essentially, with Verizon’s device, you can use a SIM from Verizon, AT&T, or T-Mobile whereas an unlocked GSM phone will only work on AT&T and T-Mobile. If you’re commitmentphobic to which carrier you want to sign up with, Verizon’s hardware will give you the most flexibility.

Also of note, neither the Verizon nor the unlocked GSM model (which is sold in the U.S. as T-Mobile’s hardware) will allow users to use Sprint’s service as Apple makes a completely separate device for Sprint’s 4G LTE service in the U.S.

For an iPhone purchase, many people will likely buy their phones with a two-year contract, which brings the price of the entry level iPhone 5s down to just $200 from $649, which means this strategy won’t mean much. However, if you’re looking at unlocked pricing where you’re paying full price for the hardware in lieu of signing a long-term contract, your best bet is Verizon’s hardware and whatever service you choose unless you decide to choose Sprint as your provider.

With the iPad, it’s a bit more straightforward as users can sign up for a prepaid data bucket every month and the iPad tablets are not typically sold with a contract to begin with. For this reason, I chose Verizon’s iPad hardware. When I travel, I prefer Verizon’s service as coverage is generally the most robust as Verizon has a larger 4G LTE footprint than any U.S. carrier. However, when I am in San Francisco and if I need mobile data, I usually opt to pay for AT&T’s prepaid service as AT&T’s speeds in major cities are generally much faster than Verizon’s.

The only major caveat with the iPad is if you want the 200 MB of free data a month. If you do, T-Mobile is the only one with such an incentive and if this is important to you then you will need to choose T-Mobile’s iPad hardware at the onset.