You may have noticed that prices are dropping on iPhones. Target and Radio Shack recently dropped the iPhone 4 down to $169.99 for the base model. Target did one better by selling the same one for $149.99. Heck, even the iPhone 3GS is getting a price cut (down to $20 at Target). While these offers may be tempting, we are here to advise you to stay away. There’s something much better right around the corner.

Phones are one of the rare purchases where the initial purchase price is only a small part of the equation. Sure, if you can get the phone you want for a few bucks less than you normally would have, go for it. But the bulk of what you’re going to be paying for comes in an envelope or an email from Verizon, AT&T, Sprint, or T-Mobile. Your monthly bills are going to easily trump anything you pay up-front for your handset. 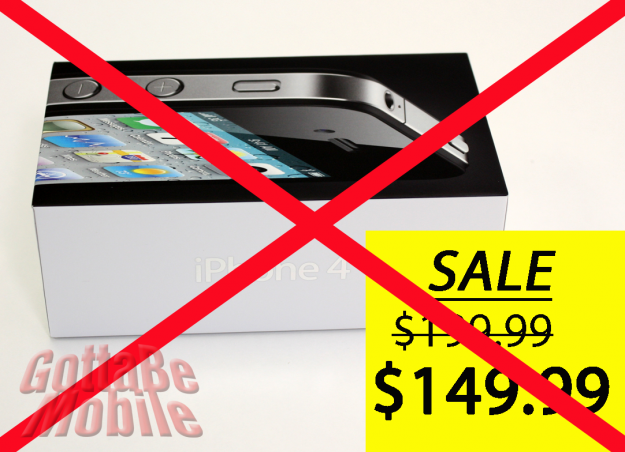 If you get a plan with a lot of minutes, a data plan (required), and an unlimited text messaging plan, you may be paying upwards of $100/month (or more) for your iPhone bill. Over the course of two years (the required contract length) that’s $2000-3000 you’re putting towards your iPhone. Suddenly $50 off the initial price isn’t sounding so great, is it?

“But–” you may protest, “it’s the iPhone. I thought you couldn’t go wrong with the iPhone?”

Though Android fanboys may disagree, those who appreciate Apple products will agree that the iPhone is truly something to behold:

Physically, it has the highest resolution of any phone on the market. Text and pictures look sharper and clearer than on any other phone you can buy right now. The phone has a slick design that harkens back to beautiful Leica cameras, and it has a glass front and back.

Apple’s iOS (the firmware that the phone runs) is easy to use. It has the best app library of any mobile devices. Since it’s made by Apple, your odds of running into a crash – or anything else that will require your being a ‘techie’ to fix – are low (much lower than on Android). If you ever do have any problems, you can take it to your local Apple Store (or send it in if you don’t live near one) and the Genius Bar will take care of it.

So, with all of these positives, why in blazes are we recommending that you not buy one right now?

The iPhone 4 launched in June of last year. In tech product years, that means it’s about as old as Larry King. It’s such a great phone that it’s still one of the best on the market (many believe it is the best). But it’s getting old, and Apple always improves on last year’s model.

As for the iPhone 3GS, don’t even think about it. This phone is already two years old. That means that, if you bought one now, it would be four years old by the time your contract ends. It was an amazing phone in 2009, but do you really want to be toting around 2009’s best in 2013?

We’re begging you to hold out because the iPhone 5 is almost here. We don’t know exactly what features it will have, but we can promise you that it will be better than the iPhone 4 – and will be well worth the wait. How do we know? Because that’s what Apple does. They make their latest upgrade more powerful and attractive than the previous year’s edition.

Apple hasn’t officially announced anything about the iPhone 5 yet, but it looks like it’s going to launch in either September or October. So it should be here within the next month or two (three at the most). It may seem like a long time to wait if you’re chomping at the bit to get an iPhone, but that’s nothing compared to the two years that you’ll be living with it.

Will it be that big of an upgrade over the iPhone 4? Yes, it will be. Apple has a lot more competition from Android than it did a few years ago, so their days of releasing a minor upgrade to the iPhone (like they did in 2009 with the 3GS) are over.

The next iPhone will almost certainly be lighter and thinner. It may have a larger screen. It is guaranteed to have a smooth, sexy design that will instantly make the iPhone 4 look like an ancient relic.

Best of all, the next iPhone will cost $200 on a two-year contract. So you’re really only paying $50 more than what you would pay for the iPhone 4 at Target right now. $50 isn’t anything to sneeze at, but that may be half of what you pay every month during the next two years.

So we implore you: don’t buy that iPhone right now. That small discount becomes meaningless when you’re looking at two years. The new one will be better, more powerful, and sexier. It will be more fun and practical to have for the next two years than the iPhone 4 would be.

You may not feel like waiting right now, but trust us – it will be worth the wait.