The coffee chain is partnering with the Power Matters Alliance, or PMA, to bring Duracell charging mats to locations where wireless charging will be installed. The aim of wireless charging is to have a cable-free environment. Essentially, a power cable will connect the charging mat to a wall outlet, and when users need to charge, they’ll just need to rest their phones on the mat. This eliminates the need to figure out which cables, and what types of cables, are needed for specific phones.

However, that’s the best case scenario. The situation with wireless charging right now is that there are competing standards, and none of the existing standards are inter-operable with each other.

The reason why your enthusiasm–as exciting as it is to ditch cables and literally cut the cord when it comes to power supplies–should be muted is that most phones on the market, and for that matter most accessories, rely on the Qi standard. Google’s recently announced Nexus 7 (mid-2013 refresh) that comes with wireless charging capabilities built-in won’t be compatible with the PMA mats. Neither would the Nexus 4 or any of Nokia’s Lumia series with support for wireless charging built-in or via accessories. Add to that list Samsung’s popular flagship Galaxy S4 smartphone with its optional wireless charging battery cover and we have the exclusion of some popular devices that won’t work at Starbucks. Unofficial Galaxy S III and Galaxy S4 wireless charging accessories from third-parties also rely on Qi.

Additionally, a number of Android phones that had debuted with 4G LTE on Verizon’s network also has support for back cover accessories that support wireless charging; all those covers are based on the Qi standard.

So what will work? Anything that’s compatible with the PMA standard will work at Starbucks. That includes the iPhone 5 Duracell Powersnap case and any third-party case or cover that taps into the PMA protocol. Duracell also makes some wireless charging cases for the iPhone 4 and iPhone 4S as well as the Galaxy S III. 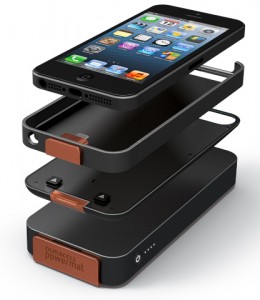 PMA recently gained the backing of wireless carrier AT&T Mobility in the U.S. so we may begin to see more phones from that carrier in the coming months that support PMA standards, which will be good for AT&T customers who frequent Starbucks. Given that PMA has announced a partnership with DuPont to embed wireless charging into kitchen counters, this could create a robust ecosystem if PMA’s standard takes off.

Yet a third wireless charging, also known as inductive charging, standard is led by Intel and Qualcomm in the form of the Alliance for Wireless Power.

As it stands, without a winning standard for wireless charging, the market will is highly fragmented and consumers won’t win. Hopefully, a clear standard will emerge that everyone can back. As it stands, since most phones–barring Apple’s iPhone and iPad devices–use the micro USB standard, it may be more useful to have a bunch of micro USB charging cables laying around in the store. However, the benefit of wireless charging is that you don’t need to think about plugs and cords. Just set the phone down, like you would on a coffee table, and it begins charging automatically. With cables, users may think twice and will only bother with plugging in if they’re low on juice, or are getting low.

Given the capabilities of a modern smartphones, many users share a similar “range anxiety” with drivers of all-electric vehicles so having public wireless charging stations available may help users get through their day taking pictures, surfing the web, browsing email, and sharing to social networks without fear of a dead battery when they need their phone the most. For Starbucks, it’s another way to entice customers to come into its chains as the coffee competition heats up with McDonald’s and now 7-Eleven entering the market with cheaper alternatives.