Recent iPhone 5 leaks have shown us how the phone’s size compares to previous iPhones, but we haven’t seen too much about how the screen compares to the current iPhone 4 screen.

A new video from MacRumors shows us what the taller iPhone 5 screen might look like compared to the iPhone 4/4S. We’ve seen a few screenshots of the iOS emulator in Xcode that show off the taller screen, but nothing with the screen actually moving until now.

The video shows off the larger homescreen with more room for apps and larger folders capable of holding up to 16 apps. For comparison, the iPhone 4S only fits 16 apps on the home screen.

Apps and movies also take advantage of the larger screen. Games and movies can show more on the screen at once, which arguably makes for a better experience.

It means smaller boxes when viewing movies in letterbox mode. The new screen also means widescreen support for games which is especially great for racing games like the upcoming Real Racing 3.

Apps that are not ready for the iPhone 5 display use black bars to center the content on the screen in this demo, which is one way Apple could deal with old apps. 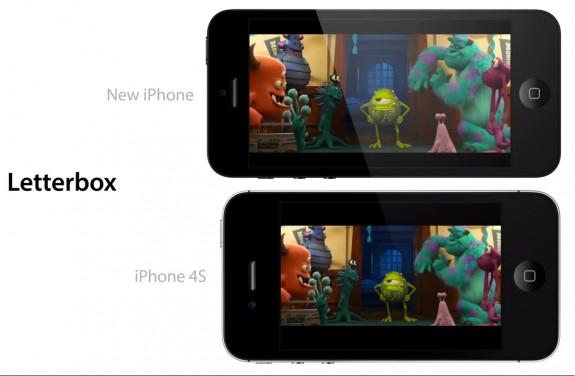 Rumors and leaked parts are exciting, but this video excites us more than most leaks. This actually shows us what the phone will look like when we use it. It’s nice to know what the shell of the phone looks like, but the software is much more important. We just hope developers have enough time to add support for the taller screen after Apple announces it.