Tangled earbud cables are a first world problem that at one time or another afflicts most mobile users. At least those who use earbuds or Apple’s EarPods. It almost seems like the cables have been designed to tangle up in your pocket or your gear bag. And the law of timing says that they will become the most tangled when you need them quickly. Of course when there’s a problem there are always solutions that become available. We’ll get to some of those later in this post. But first, why do those danged earbud cables get so tangled up in the first place? 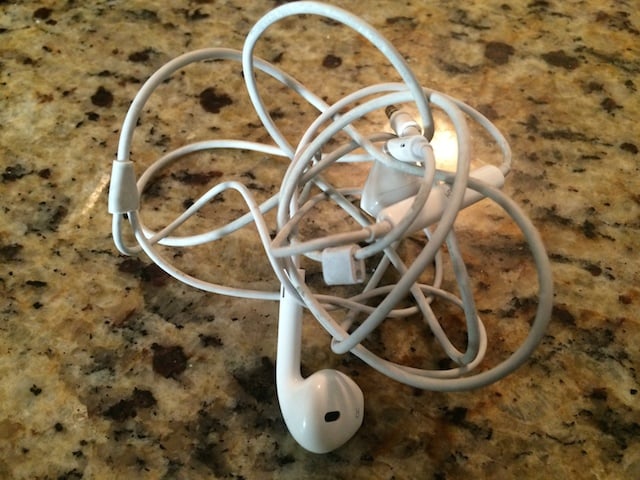 Believe it or not there is some science to explain why these cables prefer to tangle themselves up. In a paper entitled, “Spontaneous knotting of an agitating spring,” Dorian M. Raymer and Douglas E. Smith of the University of California at San Diego Department of Physics explain the phenomenon. And yes, physics plays a roll in tangling up your cables.

After performing a number of experiments it turns out the length of the cables for your earbuds or EarPods (as Apple now calls them) is one of the key variables. Other variables include the thickness of the chord and also the container you store them in. That assumes you don’t just bundle them up in your pocket which is a recipe for immediate tangling.

The paper is a little dense to get through, given the scientific nature of their experimentation. That’s not a criticism just an observation, but the bottom line is that if you have cables that are between 46 centimeters and 150 centimeters (approximately 1 foot six inches to 5 feet in length for those not metrically inclined) the chances of those cables becoming entangled increase to 50%. Apple’s EarPods are 139 cm (55 inches) long.

The “Y” configuration of the EarPods also increases the chances that a tangle will ensue. If you store your EarPod in a box (I used to use an Altoid container) all it takes is one end of one of the cables to cross another as the box gets jostled around in your gear bag and here come the tangles.

While physics is involved in this, common sense also dictates that cords will tangle, especially if there is any jostling involved whether inside a container or not. As mentioned at the beginning of this post there are a number of solutions to try and solve the tangling problem before it ties you up in knots.

Many of those solutions involve wrapping your cables around something such as a credit card, a binder clip, or any number of things that can keep the unintended tangling from occurring. But keep this in mind. Any sound engineer will tell you that wrapping cables around anything will eventually stress the wires inside the insulation, in some cases leading to the cables failing. Apple’s EarPods and other relatively inexpensive earbud solutions certainly aren’t manufactured to last forever. Sound, video, and lighting engineers will coil up a cable without wrapping them around an object and tie the coil up. Most use the over/under method when coiling a cable.

All of that said, GBM’s Craig Lloyd back in the day he was writing for Lifehacker came up with a number of solutions to try and prevent cable tangling that you can find in this post and the video below. Most of these solutions don’t cost you any money or are very cheap.

And there are a number of options that do cost a few dollars or so that involve wrapping your cords around something. These somethings include anything from comb like pieces of plastic that look like fish to spools that will wind and unwind your cords. There are also organizer pouches that can be purchased for you to stash a cable bundle in. We’ve reviewed a few of these kind of gadget accessories in the past. Of course one could just as easily use any number of velcro strips or even a rubber band or ladies pony tail accessory to do the trick.

The bottom line is that there are as many different solutions as there are ways for your EarPod or earbud cables to become tangled. There’s been no perfect solution, nor do we expect one in the future. Add earbud cable tangling to the list of first world problems like smudgy fingerprints on display screens that we all share.