Intel’s power-boosting and battery efficient Haswell processor, to succeed the third generation Core i-series, may make Google’s Chromebook a lot more appealing as a laptop replacement. According to Kevin Tofel of Giga Om, the Internet search giant is looking to use Intel’s next generation Haswell processor in a future Chromebook, and references for Haswell has been found in the code for Chrome OS for a device that has the code name of Slippy.

Google’s Chromebook Pixel is currently the most feature-packed Chromebook hardware to date, shipping with a third generation Intel Core i5 processor–the same kind that’s in Apple’s MacBook lineup and the Microsoft Surface Pro tablet–an ultra high resolution touchscreen panel that rivals the MacBook Pro, as well as options for 4G LTE connectivity via U.S. carrier partner Verizon Wireless. Given its Ultrabook-like specs, the netbook doesn’t come cheap with a base asking price of $1250 while cheaper Chromebook models from partners retail for about $250-$500. 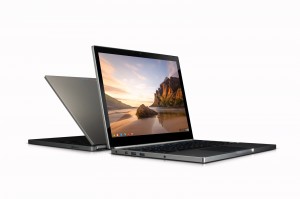 This longer battery life on a single charge will help to increase the appeal of the Chromebook Pixel if users can use it for Internet surfing, word processing, slideshows, photo previews, and more, without having to be tethered to an outlet. The official battery life claim made for the Chromebook Pixel is 5 hours of computing time. If Google can stretch that to 8 or 12 hours and reduce the pricing, we may have a winner.

According to Tofel, a refresh of the Chromebook Pixel isn’t expected at Google’s I/O conference in a few weeks, however, so interested users would have to wait until fall or the holidays when a likely update in specs will come. Haswell isn’t expected to ship until June 4th on devices.

Haswell is also rumored to be coming to Apple’s new MacBook refresh as well, which has recently been rumored to arrive at WWDC in June.