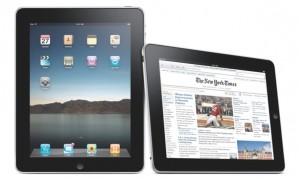 Developers who have taken a peek at the iOS 5 software have found references to two new iPad models not yet released–iPad 3,1 and iPad 3,2–suggesting that the new iPad models could potentially come late summer or early fall alongside Apple’s speculated next-generation iPhone refresh. While the iPad 2 tablet was only released recently–and is still constrained by inventory shortages at retail channels–the device was seen as a modest refresh from the original iPad tablet.

Many had speculated before the second-generation tablet’s announcement that Apple would release another refresh later this year to update the resolution of the iPad’s display to Retina-like display quality.

Additionally, iPhone 4,1 and iPhone4,2 references were also present in the firmware. The missing iOS touchscreen member is the iPod Touch, which may indicate Apple may not host an iPod refresh this year. Historically, the company had introduced new iPod models at the Fall music event.

While these references are appearing in the beta version of iOS 5, it’s unclear if their appearance will indicate a release date in late summer or early fall, however.