Apple, which usually does not like to disclose its suppliers or who makes components for its consumer electronics devices, gave a nod to Corning, makers of Gorilla Glass, in its latest economics report. In that report, Apple acknowledges Corning for the use of glass for the iPhone, but did not specify that it was Gorilla Glass being used: “Corning employees in Kentucky and New York who create the majority of the glass for iPhone.”

When Steve Jobs had unveiled the iPhone with its scratch-resistant glass on the front and rear surfaces of the phone, Apple did not specify Corning at all on stage at that device’s introduction. Instead, Apple and its representatives only described the glass as being chemically strengthened. When I pushed forward to inquire if Corning was the manufacturer of the iPhone 4’s strengthened glass displays, Apple reps on hand said the glass was similar to Gorilla Glass. 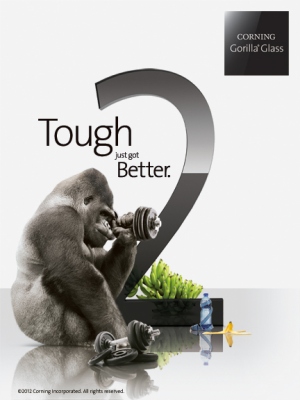 While the economic report mention of Corning is rather unsubstantial, it does create implications for the iPhone 5. Corning had introduced Gorilla Glass 2 at the beginning of this year in Las Vegas, noting that the second-generation of chemically strengthened glass is thinner and stronger than the first-generation by up to 20%. For device manufacturers, like Apple, that could mean cramming more radios–perhaps a 4G LTE radio in the iPhone 5–or a larger battery–perhaps to accommodate for LTE’s battery drain–or coming out with a slimmer product.

With recent speculations that the iPad 3 may debut with 3G–rather than 4G LTE–perhaps the iPhone 5 will be the first Apple product to come with 4G LTE network support. The benefit of 4G LTE is that it offers up to 10 times the speed of 3G data speeds, but the drawback is that 4G LTE is still limited in availability as carriers are only starting to build out their networks. Additionally, battery drain on LTE is much greater than with 3G, which would mean that Gorilla Glass 2 could allow Apple to stuff a battery with 20% increased capacity if it retained the design of the iPhone 4 or 4S.

Gorilla Glass has become such a big staple in the industry that when Samsung and Google debuted the Galaxy Nexus with a chemically strengthened glass specifically not made by Corning, there was a bit of controversy among users.