Look what DirecTV put up on their site. A “coming soon” page for a new product called DirecTV Nomad, which I assume will stream video from my DirecTV box to my mobile devices through the Internet.

In the picture we see what looks like a MacBook Pro, an iPad and an iPhone, although DirecTV might intend them to represent a generic laptop, tablet and smart phone. With various reports saying that Android makes up around half of new smart phones, let’s hope DirecTV is forward thinking enough to include the platform. 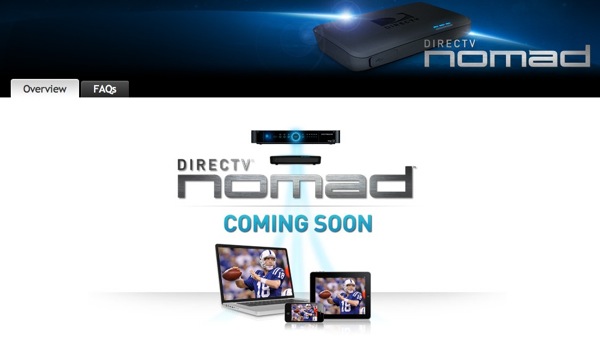 Recently we’ve seen the same kind of streaming mobile and web apps for other cable providers and DISH Network. This brings DirecTV up to date with the others. They already stream NFL games through their NFL Sunday Ticket To Go app, which costs an extra $50 to use. Expect Nomad to require either a set top box update or an additional device as well as another fee added onto your bill.