Samsung is now debuting a new in-house imaging technology that it says will be integrated into high-end mobile devices, which could mean that the camera sensor may make its way into Samsung’s Galaxy S5 flagship in spring 2014. ISOCELL will help cameras on smartphones capture more light and retain increased sharpness, boasting superior performance to the backside illuminated, or BSI, sensor technology that’s often utilized by rival Sony in its Exmor imaging sensor.

Because the ISOCELL camera sensor will be able to capture more light, the sensor may help the Galaxy S5 capture images in low light without having to use a flash. Such a sensor could help the Galaxy S5 compete in the market that’s being led by Nokia with the Lumia 920, Lumia 925, and Lumia 1020 smartphones as well as the HTC One, LG G2, Moto X with Motorola’s ClearPixel technology, and the larger imaging sensor on the new iPhone 5s flagship from Apple.

According to Sammy Hub, the first ISOCELL sensors will begin mass production at the end of this year, meaning that it could appear in time for the Galaxy S5 smartphone.

“In comparison with the prevalent BSI technology, ISOCELL decreases the crosstalk by approximately 30 percent resulting in a better picture with improved sharpness and richness and increase of full well capacity (FWC) by 30 percent,” Sammy Hub wrote in its report. 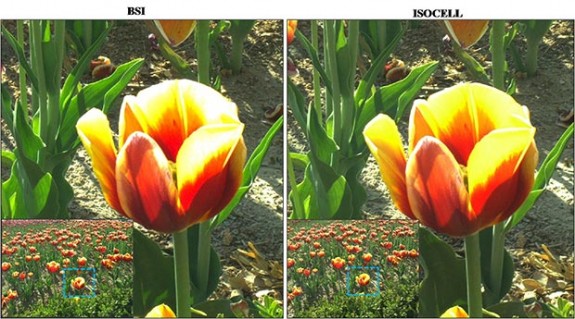 The one problem is that it will be an 8-megapixel sensor. While a high megapixel count doesn’t equate to a better camera, Samsung would have to do a lot to convince consumers of the 13-megapixel equipped Galaxy S4 that it will in fact be an upgrade, in terms of camera performance, to a new 8-megapixel Galaxy S5 flagship. As consumers are trained that more megapixels typically mean increased sharpness, a lot of education and marketing will have to be invested in the Galaxy S5 to highlight the superior photographic performance if Samsung does choose to go with its internally developed ISOCELL technology.

The sensor size is smaller than typical smartphone sensors measuring in at 1/4-inch whereas smartphone camera sensors are typically 1/3-inch. However, because Samsung is keeping the megapixel count manageable rather than increasing the count, each pixel measures 1.12um, which is fairly large to allow enough light to pass. For comparison, each pixel on the 4-megapixel Ultrapixel technology employed by HTC on the HTC One is double the pixel size of new Samsung technology with a 2-micrometer pixel.

Another factor towards better low light camera performance is optical image stabilization. Nokia pioneered this on the Lumia 920 smartphone, which counters hand shake when holding the camera in dim light where a longer shutter time is used to properly expose a photo in darker conditions. Since then, HTC and LG have both adopted OIS whereas Apple has implemented a more inferior digital image stabilization technology through software. It’s unclear if Samsung will implement optical or digital stabilization with ISOCELL or whatever sensor it chooses for the Galaxy S5 for spring 2014; image stabilization was rumored for the Galaxy Note 3 prior to that device’s debut, but it was speculated that Samsung could not secure the components in large enough quantity and decided to scrap OIS on that phone’s camera at the last minute.

Most recently Samsung is rumored to be tapping Apple’s metal supplier for the body of the Galaxy S5 as the company moves to a more premium build away from the plastic construction.