According to the latest projections from DisplaySearch, Apple may be employing a flexible AMOLED display for its much anticipated and highly rumored iWatch wearable smartwatch. According to the forecast posted by CNET, the iWatch is said to use a flexible display with a 320 X 320-pixel resolution distributed over a 1.3- or 1.6-inch screen. The resolution would be the same as the one Samsung uses on its Galaxy Gear smartwatch released late in 2013.

At this point, it’s still unclear how accurate DisplaySearch‘s predictions are, but the possibility of an AMOLED display would be a first for Apple. Though Apple was rumored to use AMOLED on prior versions of the iPhone in the past, late CEO Steve Jobs had said at the time that the company chose to go with an IPS LCD display because of the screen technology’s more accurate colors. 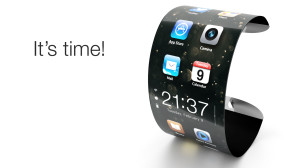 Additionally, there are still questions about the iWatch. If it’s true that a flexible AMOLED panel is being used, it’s still unclear if Apple will allow the screen to naturally bend or if it will be a fixed display. Samsung, which uses a flexible AMOLED panel on its Galaxy Round smartphone, had permanently fixed the curvature of the screen so that despite the use of a flexible display, the curved screen doesn’t bend. On the other hand, rival LG’s G Flex does bend a little, making the plastic screen more resilient to break and damage by allowing the display to handle more force and stress.

A flexible display iWatch would mean that the screen would better wrap around a user’s wrist. A release date isn’t known and earlier this year, it was rumored again that the smartwatch has been delayed as Apple had encountered issues with manufacturing.

Additionally, further highlighting the fact that Apple may be working on various larger display sizes for the iPhone 6, DisplaySearch is also throwing in its predictions in that arena. According to the firm, Apple has two screen options–a 4.7-inch 1600 X 900-pixel display and a second 5.5-inch 1920 X 1080-pixel screen.

If true, this would be the first time that Apple would push beyond the 4-inch 1136 X 640-pixel screen that debuted since the iPhone 5. The 5.5-inch phablet would also mark the first 1080p iPhone and would bear the same resolution as Samsung’s 5.7-inch Galaxy Note 3’s display.

Given DisplaySearch‘s spotty record for predicting Apple’s products pre-release in the past, it’s unclear how accurate these forecasts are and information here should be taken with a grain of salt.