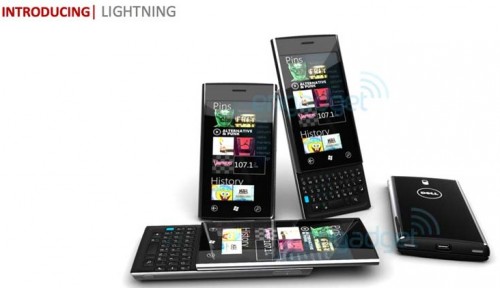 Engadget managed to sneak a peek at top secret documents showing off an upcoming Windows Phone 7, uh, phone* from Dell they’re calling Lightning. Could be a code name, but regardless, it’s clear they’re aiming for speed and power with this one.

It’s also clear Dell didn’t have all the latest data on Windows Phone 7 when they put this material together. The specs cite a 1GB ROM and microSD card slot with an 8GB card, but we know WP7 requires 8GB minimum built-in storage. Still possible with this, but that card can’t be user-accessible without reducing the requirement to an option. The ‘Core Experiences’ section also cite “Full Support of Flash, Flash Video and Silverlight,” which we already know is not being fully supported by WP7 at launch. But the biggest indicator this is outdated material? The OS is named as “Windows Mobile 7”.

In other words, don’t take any of these specs as final. Most of it should stick just fine, such as 1GHz QSD8250 Snapdragon processor, WVGA 4.1-inch OLED display, 5 MP autofocus camera, GPS, accelerometer, compass, and FM radio, but they’ll need to re-think or re-word a good chunk of this before launch. As for the form factor, I’m no fan of sliders (or any phone with a hard keyboard), but I gotta think those right angles at the bottom will make using the keyboard uncomfortable at some point. Still, looks pretty slick, but I’ll wait on final specs before judging.

*Okay, I officially rescind my approval of the “Windows Phone 7” name. Windows Phone 7 phone. Tell me people won’t look at you funny if you call it that in public.