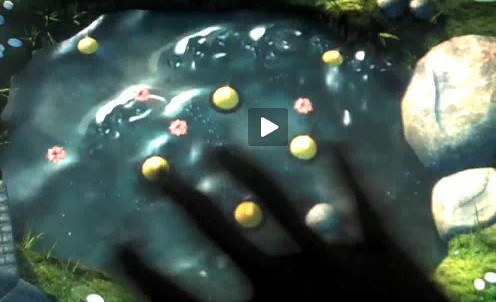 By now, you’ve seen the news of the bundle of multi-touch applications for Windows 7 called Touch Pack and watched Rob’s concise and enlightening InkShow demo. If not, what are you waiting for? Five minutes  for a glimpse of the future. I think it’s worth it just to watch Rob try to nudge delicate paper boats across a serene pond by crushing them  with his  powerful ghostly  fingers. Rob Smash!

Anyway, while I found the news very exciting, I noticed a good share of comments questioning what this meant for us pen-input and single-touch Tablet PC users, and whether we were being left out of the fun. I admit a bit of doubt and worry crossed my mind as well. However, I think the whole multi-touch movement has been and will be very positive for us in the long run.

First, I think multi-touch will  act as  a gateway to pen input. Just as kids graduate from fingerpainting to drawing with crayons and so on, multi-touch newbies will advance from streaking paint across the screen with their fingers to crafting precise strokes and flourishes with the pen. Using your fingers for input is convenient and sometimes fun, but as people start to do more with their touchscreens, they’ll starting reaching for pens to write and draw.

Second, not all the new touch input apps bound to appear will rely on multi-touch. For example, plenty of great iPhone apps make excellent use of the touch input, but only a few require or even make use of multi-touch. Not every task requires multiple points of manipulation, so I’m sure a lot of touch-optimized programs for Windows 7 will work well with the  pen and single-touch, just as they do on current multi-touch platforms.

Finally, multi-touch should lead to more tablet options, and that is my biggest hope in all the multi-touch excitement. So what if  some new  tablets won’t include active digitizers for optimal pen input. They’ll still support single-touch input and some type of pen input (even if it’s a third-party pen like the Pogo Sketch). The point is, there should be increased adoption  of and options for  the tablet form factor, and that’s good for all of us tablet enthusiasts.

So I say,  let multi-touch be the big star. Let it get all the attention. Sure, I’d love to see more toys for pen input, but as long as it brings more interest in the tablet form factor, it’s all good by me. What say you,  my fellow  Tableteers? Great for all of us? Just another form of input? Or are we pen users doomed to be crushed by Rob’s mighty fingers  pinched out?