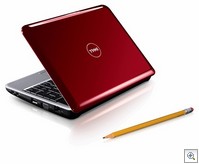 Yesterday’s news that Acer had cut the price of the Aspire One NetBook line by $50 was seen by some as a shocker. I think Acer was feeling the heat of Dell’s supposed $299 price tag. Dell was rumored to announce one of the NetBook world’s worst kept secrets yesterday but hasn’t yet. (Side note: in a way that makes sense. The first of the week is usually the normal time to announce new products.)

But back on topic, The New York Times Bits Blog picked up on the price cut news and is running a post that says we might see prices as low as $249 by the holidays, with $299 being a norm. The post quotes Envisioneering research director Richard Doherty with the speculation.

Anyone who has been following the NetBook scene will understand that the nascent market is really just beginning and that we’ve seen more announcements than you can count. On one hand, it would be a fascinating development if the prices all settled in around the same low price point as that would force the manufacturers to look elsewhere for differentiators between their respective models. On the other hand, with prices at impulse buy levels, the key might become who can get these small devices into potential customers hands the quickest through sales channels.