Will the iPhone 5 be the first 128GB iPhone?

Since the introduction of the iPhone, Apple has pushed the storage capacity higher with almost every release.

As the iPhone 5 release date approaches, and my 64GB iPhone 4S warns me that I don’t have enough storage space to update my apps, I have to wonder if Apple will bump the storage sizes of the iPhone 5 up this fall.

Running out of Space 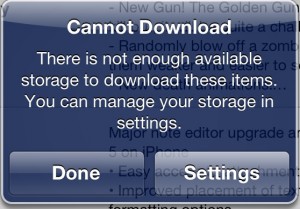 In the past 6 months I’ve used the iPhone as my go to phone, and last night I found out that I didn’t have enough storage space to update the apps already on my phone.

I had just over 5GB of storage space left. In order to download these updates, I had to delete several apps including Modern Combat 3 and Almost DLSR, which was loaded up with video files.

After cleaning house I have 11GB of breathing room, but this has taught me that the iPhone needs at least 5GB of storage free to function.

My iPhone has a lot of photos and videos, which take up about half of the space, with Apps occupying another 16GB. I may be in the minority here, but I know I’m not alone.

Cost is the biggest factor that could prevent Apple from introducing a 128GB iPhone 5. According to iSuppli, Flash storage is responsible for most of the cost difference to Apple.

Even if advances bring the price of Flash memory down, Apple would need to charge a premium for a 128GB iPhone 5 or eat a larger portion of the cost if it retailed for $399.

This February Samsung, a manufacturer Apple works with for parts of the iPhone, announced the smallest 128GB NAND Flash memory chip. These chips are smaller than a penny, and are already ramping up into high production.

Silver Lining in the Cloud?

The cloud could help alleviate some of the storage woes without the need for a 128GB iPhone 5. PhotoStream currently stores the last 1,000 photos taken, but if it stored more photos and included videos, users could rely on the cloud more.

4g LTE speeds will also help users call up photos and videos on the go, even with 4G LTE data caps.

Apps currently can’t benefit from the cloud, but if Apple would allow OnLive for the iPad and other services that stream games instead of storing the assets and processing locally, the iPhone and iPad could be used to play higher quality games without the need for massive amounts of storage.