Will the Next Kindle Fire HD 2 Be a Nexus 7 Competitor?

New screen captures taken from a site that collects hardware benchmarks for devices seems to back up earlier reports the Kindle Fire HD 2 will be a worthy competitor for the newly refreshed Nexus 7 tablet.

According to the specifications, which came from the GFX benchmark utility and were later picked up on by Chinese site MyDrivers, the next tablet in the Amazon’s Kindle Fire line will feature a 2.1 GHZ processor. It will also be backed up by the latest Adreno 330 graphics processing unit. Together, those specifications would be enough to put the tablet far beyond the capabilities of today’s Kindle Fire. However Amazon hasn’t stopped there. 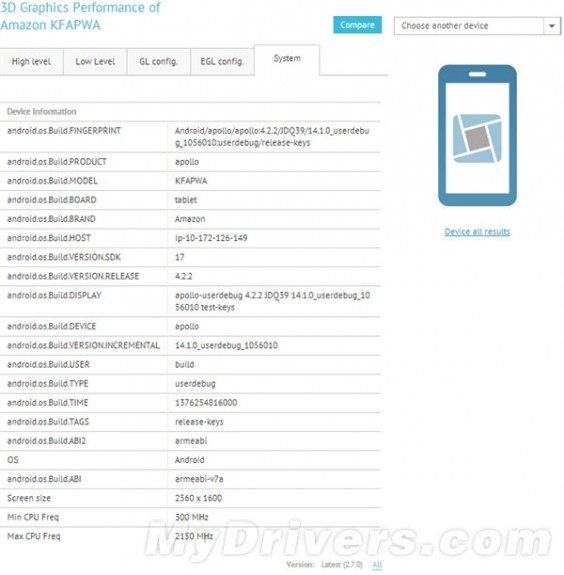 These screen captures also indicate that users could be treated to a Kindle Fire with a display resolution of 2560 x 1600 pixels, putting the Kindle Fire HD 2, codenamed “Apollo,” well ahead of the 1920 x 1200 resolution of the Nexus 7 that debuted to fanfare earlier this summer. Unfortunately, that doesn’t leave us with an exact screen-size. That resolution could mean that the Kindle Fire Apollo device will come equipped with a screen measuring anywhere from 8.9-inches to 10.1-inches.

Users who prefer to only purchase devices that have the latest version of Android on-board wouldn’t necessarily have reason to fret with this device either. According to the benchmarks, the Kindle Fire Apollo has Android 4.2.2 on-board, just one minor release away from the current version of the operating system, Android 4.3.

While that means users won’t be able to take advantage of the Chromecast functionality and graphics support that Android 4.3 offers, it’s likely that Amazon will once again redesign the custom Android skin that it’s placed over the version of Android running on every one of its Kindle Fire tablets so far.

Reports originating from the Boy Genius Report had already indicated that users could expect a Kindle Fire tablet with a display that has the same resolution as the device in these alleged benchmarks. That publication’s sources believed that the device would have a screen that measured 8.9 inches. As these devices are possibly one in the same, that could at least put all the questions concerning the specifications of the next high-end Kindle Fire Tablet to rest.

There’s still no exact time-table for when users can expect Amazon to launch the Kindle Fire HD 2 although all indications have been that they’ll launch sometime this fall before the holiday buying season.