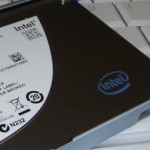 As I mentioned a couple of times during my evaluation of the ARMOR X10gx, its Intel solid state drive is blazingly fast. How fast? Check out the detailed review of the Intel X25-M SSD at Notebooks.com and maybe win one to see for yourself.

Our teammate Josh Smith has been dropping hints of his evaluation on the Twitter, the results of which are now quantified and documented. He’s covered everything from installation to benchmarks. While I have not performed a direct comparison of SSD vs. HDD as he has, his numbers look spot on to me. As I showed in my InkShow, the ARMOR X10gx with Intel SSD started up cold in just under half a minute and could sleep or resume in a second, much quicker than my other PCs with faster processors and more memory.

Josh closes his review the best way possible – with a giveaway. Pop over to see how you can win an 80GB Intel X25 SSD (Hint: it involves Twitter, U.S. only). Wish I could win because I am seriously looking into getting one of these for myself.* Josh is absolutely right about how slow a hard drive feels after you’ve been using an SSD. Also important to us mobile users is how much better an SSD holds up to movement and vibration. I’m shopping around, looking for a deal, but I completely intend to have one in my primary Tablet PC by the end of the year (and maybe even a hybrid drive in my media PC).

*Spoiler: Truth be known, I am about to receive an SSD for myself. In a slate. Running Windows 7. Details when it happens.