Apple changed mobile phone security for ever when it revealed its TouchID home button for the iPhone and iPad. Now Microsoft is hoping that its coming Windows 10 update will do the same for Windows users. This morning the company announced Windows Hello, a new feature that’ll let users unlock their devices without any hassle.

Microsoft detailed Windows Hello in a post on its Blogging Windows site. The company describes Windows Hello as “biometric authentication which can provide instant access to your Windows 10 devices.” Put plainly, Microsoft is finally integrating support for fingerprint readers and facial recognition into Windows where it should have always been. The company says it’s doing all of this to help put an end to passwords. 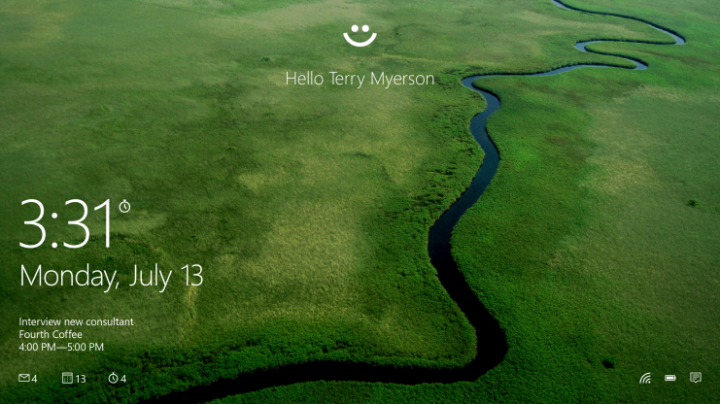 When Windows Hello arrives users will be able to log into their notebook desktop or tablet using a fingerprint reader, facial recognition and eye detection. Instead of creating its own physical technology and sensors, Microsoft will simply support what’s already out there and things coming to new devices. Microsoft says users who already have a device equipped with a fingerprint reader will be able to use Windows Hello when they download Windows 10 as a free update. Additionally, every notebook or desktop with Intel’s RealSense camera hardware will support the technology too.

Microsoft is also building out a service that’ll allow websites makers, app developers and large businesses to integrate directly with Windows Hello, according to Microsoft. “Instead of using a shared or shareable secret like a password, Windows 10 helps to securely authenticate to applications, websites and networks on your behalf – without sending up a password.” Called Passport for now, the service will ask users for a code before it signs them into apps or websites. Users of PCs without a Windows Hello compatible sensor will have to enter a PIN code to use the Passport service.

In theory, some users with PCs and devices running Windows 10 will never have to remember their passwords. At the very least, Intel RealSense equipped notebooks, desktops and tablets won’t require that users enter a password, which can be cumbersome on a device with no keyboard or non-touch input method.

Giving device makers the tools they need to eliminate the password just makes sense. Today, millions of devices have been sold with a fingerprint reader built into them. That being said, Microsoft left support of these types of devices in the hands of the individual PC maker. Unlocking your PC with a fingerprint reader has always involved using barely working software.

The really interesting thing is going to be how Microsoft positions Windows Hello and Passport within its Windows Phone ecosystem. Previous versions of Windows Phone were separate from the other versions of Windows, but Windows 10 will unite them under one codebase and vision. Microsoft doesn’t come right out and say that Windows phones will support hardware similar to Apple’s TouchID fingerprint reader, but it’s not a leap to come to that conclusion. If Windows Hello and Passport are a part of Windows 10 for Phones’ feature set than we could see an iPhone rival made by Microsoft with a fingerprint reader built-in.

Microsoft expects to launch Windows 10 the year as a completely free upgrade for devices running Windows 7 and Windows 8. Windows Phone 8.1 devices are also included in the upgrade, but it’s not clear if all of those devices will be compatible. Other features in Windows 10 include an all-in-one integrated Store for apps and media, a resizable Start Screen and Windows Store apps that can run on the Desktop. There’s also a tablet mode switch for users who’d like all of their apps to appear in full screen.