Starting today, anyone who isn’t eligible for Microsoft’s free Windows 10 upgrade beginning July 29th now has their alternative. This week online retailer Amazon began offering Windows 10 upgrades and media for those users who won’t be able to download the operating system free of charge. All told, the upgrades are expensive, but at least Microsoft has embraced some newer technology to try and make the upgrade process significantly less painful than before. 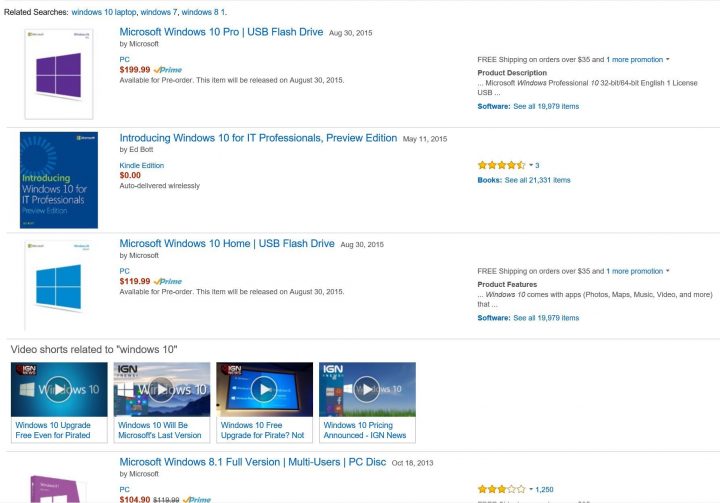 Notably, Microsoft has decided to change the way it delivers large operating system upgrades. First Windows came on a floppy drive, then on a CD. Fresh copies of Windows 8 came on DVDs or in digital downloads. Windows 10 Home and Windows 10 Pro comes on a USB drive. Besides making the installation faster, the change means that users don’t have to purchase an external disc drive just to get the latest version of Windows 10. The switch makes sense; the overwhelming majority of Windows PCs sold every day don’t have a built-in disc drive for reading discs or copy media.

Windows 10 has tons of new features meant to bring Windows into the modern age. There’s also plenty of fixes for issues users had with Windows 8. Better storage management and power management make it easier to find what’s taking up the space on your PC and get just a bit more battery life when necessary.

The Start Screen that Microsoft introduced in Windows 8 and refined in Windows 8.1 is back in Windows 10, but it’s not meant for everyone. Only when Tablet Mode is on do users get full-screen apps and the Start Screen. Anytime outside of that, the Start Screen turns into a more familiar and mouse friendly Start Menu. Every app included with the operating system is updated with a new design and new features. Mail and Calendar even work with iCloud and Gmail.

It’s is disappointing that Microsoft has decided not to make these Windows 10 upgrade drives available to users on the same day as upgrades, but that does mesh with Microsoft’s Windows 10 launch plans. Microsoft will begin updating PCs with Windows 10 in waves on launch day. First it’ll upgrade those participating in its Windows Insiders Program. Next, it’ll update Windows 7 and Windows 8 users who reserved their copy a few months ago.