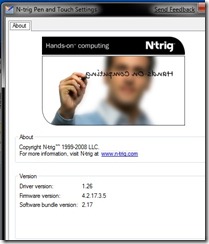 I documented my experience with the Windows 7 pre-beta, N-Trig’s Win 7 multi-touch driver, and the Dell Latitude XT Tablet PC back in November. Most folks will remember that experience as being pretty lousy.

Well, there is finally some good news to report. I just finished installing Windows 7 Beta 1 and the latest N-Trig multi-touch drivers for Windows 7 on the XT, and I’m pleased to report that the experience is much improved. Picture zooming,   rotations, zooming in web page, etc are all much smoother and I what I expected when I first tested it. Zooming could be still be improved, but it is much better than the pre-beta. In addition, there is no vectoring when switching from pen to touch, inking, etc. (See update below) This feels like a solid multi-touch experience. Microsoft and N-Trig should be commended.

There are no N-Trig dialog feedback dialogs, and no N-Trig control panel options other than an About panel. Windows 7 has clearly taken over the multi-touch experience from beginning to end.

I’ll be working up an InkShow to show off the changes. Stay tuned.