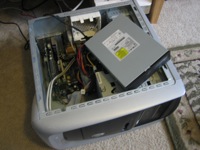 With tons of hype and a multitude of screen shots being posted, I was eager to get some hands-on time with the Windows 7 public beta.   I decided to see how much damage would be done to my old Celeron desktop with a fresh install.   Although my desktop is not a mobile device, I wanted to see how Windows 7 would perform as I traditionally use this computer as a central hub for filesharing within my home network.   I was doubtful that I could even get the public beta to install because of the computer’s low specs, but the successful reports of Windows 7 on numerous netbooks kept me optimistic.

I won’t cherry-coat things by saying Windows 7 runs flawlessly on my old box; the Windows 7 index score is a lowly 1.7.   While Windows 7 was not built for computers 7+ years old, the fact that it installed smoothly and runs in a functional state is impressive.   I simply popped in the DVD, followed the prompts, and wah-lah.   I was surprised how all of my devices were recognized and configured correctly immediately following the installation.

Windows 7 functions well enough that I will consider installing the full version when it is released.   Although large video playback is minimal at best, web surfing, emailing, blogging, wordprocessing, and watching videos on YouTube are fully functional.   It’s objective to state, but Windows 7 appears and feels to run as smoothly as Ubuntu 8.10.   After adjusting the Windows appearance settings for best performance, simple actions like minimizing and maximizing windows became more fluid.   The real culprit for sluggish performance aside from the old Celeron processor is the limited 512 MB RAM.   As the task manager shows, much of the physical memory is consumed.   However, I am impressed that the public beta works so well despite the computer’s age and memory limitations.

One of the trumpeted feature improvements in Windows 7 is Microsoft’s focus on home filesharing; Microsoft has made attempts to make home networking simple and less complicated for the average and novice user. 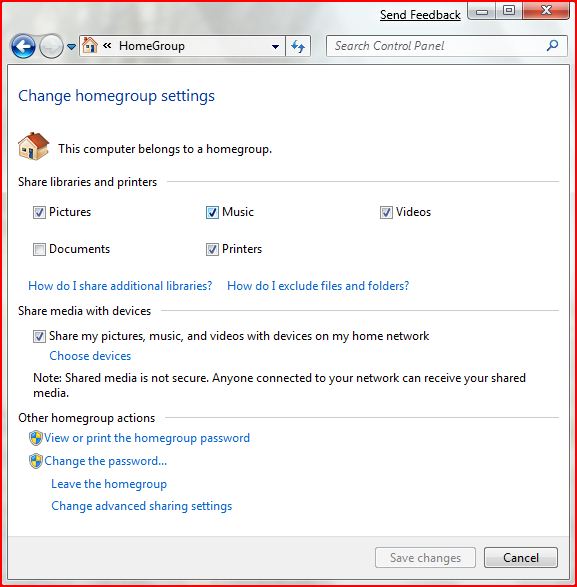 After establishing a homegroup, you’re able to select what type of files and media you’d like to share on your home network.   A unique password is generated by Windows for others to enter when they wish to access shared files.   The filesharing menu shown at right illustrates how simple it is to make your media and documents available on your home network.   Windows 7 filesharing shows great promise in sharing with and integrating mobile devices and other computers in the filesharing process.

The Windows 7 user interface is a welcomed improvement over XP and Vista.   Microsoft has created an intuitive computing experience that novice and expert users will appreciate.   What once took four or five clicks through several menus now takes two.   The true power of Windows 7 is in the search bar.   Searching for things in XP felt cumbersome, slow, and produced invalid results, but Windows 7 search is a whole new ball game.   If you want to adjust Window’s appearance settings, typing in the word “performance” yields numerous, valid results.

Windows 7 finally feels easily customizable.   Included with the public beta are many beautiful themes that truly change the look of your desktop.   Unlike XP’s limited themes, changing a theme in Windows 7 is simple and makes your desktop feel personal.     As other OS X fans have said, I must admit that Windows 7’s eye candy is enough to make me consider becoming a PC again.

How does Windows 7 perform on your old hardware?   Share your experiences in the comments and check out Rob’s InkShow of Windows 7 on an LS800 Tablet PC.