Windows 7 Slate vs. iPad on Video, What Will Consumers Choose?

Here’s a quick video comparing the Windows 7 experience on a consumer slate to the iPad. The slate in question is the Hanvon slate we first spotted at IDF 2009, which means Hanvon must’ve worked extra hard (maybe time traveled) to mimic the iPad’s design (I kid).

Anyways, it’s not a surprise that the Hanvon slate can keep up with the iPad when it comes to tasks like watching YouTube videos, web browsing or tapping out email. The big difference between the two user experiences demonstrated in the video is that everything on the iPad is designed specifically for touch, while the Windows 7 UI was designed for mice. Yes, the touch keyboard and touch interface of Windows 7 works, but as you can see in the video it is a pain to make small selections. Of course, the Windows 7 slate has true multi-tasking and can run full-featured applications. It also has a camera and a full selection of port, which means some users could use it as their only mobile device since there’s no sync required and peripherals can be plugged in.

But in their current form, Windows 7 consumer slates aren’t competitive with the iPad, at least in the eyes of  Joe consumer. Battery life on the iPad is incredible, it wakes instantly and every app is built with touch in mind. Are there things to dislike about the iPad? Sure, lots of them, but it’s good enough and simple enough for the average user to dive right into.

Consumers buying slates and iPads this year are typically buying their first such device. Moving from a clamshell notebook or desktop to a slate can be a big jump. And for now, Apple has another huge advantage- its retail stores. On any given day countless first-time iPad owners are trained on how to use their new devices. These free training sessions are why this group of iPad owners are smiling, rather than becoming frustrated, calling customer support and returning their devices. 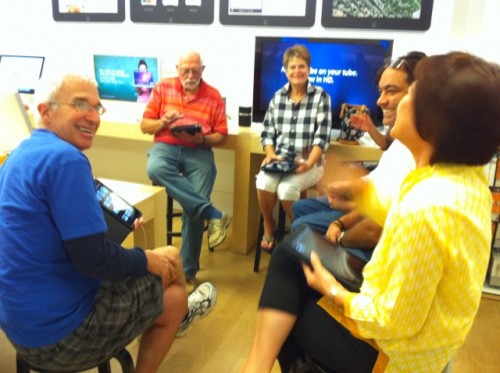 Us geeks forget that there are still a lot of folks out there that need (or want) to be trained on how to perform what we consider simple tasks, such as organizing photos, setting up email accounts and calendars.

It’ll be very interesting to see what (or if) HP and other Microsoft partners launch later this year. Whatever it is, they have some serious catching up to do, at least in the eye of the consumer.

What do you think? Will consumers pick a Windows 7 slate given the choice between it and the iPad?