Screenshots taken from the most recent leaks of Windows 8.1, the upcoming update for all Windows 8 users, indicates that with just weeks to go until availability, Microsoft is making the Windows experience easier for users to grasp by taking elements from Windows Phone 8

In this latest build of Windows 8.1, Microsoft has added a ton of small items that are designed to make the Windows 8 experience easier for users out of the box.

For starters it’s finally filled the Help & Tips application with visual, text and video tutorials for users who are new to Windows 8.1. Although the application debuted in the Windows 8.1 Preview earlier this summer, then the app consisted of only a few articles, leaving industry watchers to worry that Microsoft would miss another opportunity to educate users about Windows 8’s differences from earlier versions of Windows. 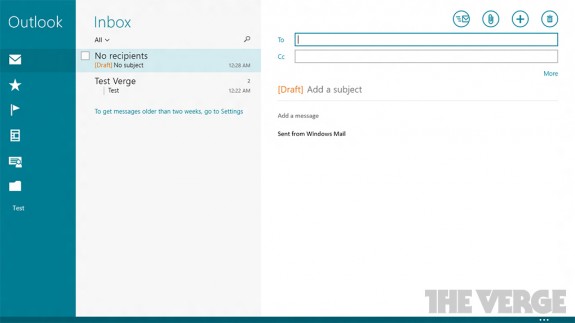 The Windows 8.1 Mail application with the updated, App Bar design at the bottom. captured by The Verge.

These builds have also revealed that Microsoft plans to boost the discovery of the App Bars inside Windows 8.1 apps. In its effort to put application interfaces at the forefront of what users see, Microsoft forced many of the options that would have normally been represented by an icon, inside small bars that fly out from the top and bottom of most applications. Instead of creating some on-screen indication that there were more options hidden inside these App Bars, Microsoft required users to swipe from the top or the bottom of an application to see these options.

In hind sight, that seems to have been a huge mistake. As Microsoft didn’t do an amazing job with educating users about navigating Windows 8, many users simply didn’t know that these options were there – and likely still don’t. With the 8.1 update, App Bars will poke out at bottom of the screen and have three dots so that users know that they are looking at an element of the application that can be opened.

There’s more in this update too, including the introduction of Skype into the default list of application that are installed on every Windows-based system, and updated versions of the Mail, People and Calendar applications according to The Verge.

It seems, Microsoft is finding inspiration in what should have been a place it already looked before building Windows 8: Windows Phone. The new Help & Tips application, minimized on-screen App Bars and the universal Bing search functionality were all inside Windows Phone 8 and Windows Phone 7.5. Even the new application drawer in Windows 8.1 first debuted on the company’s mobile operating system.

That Microsoft is making the Metro-design experience easy for users in Windows 8.1 is great, however if the features included in Windows 8.1 have revealed anything about how Microsoft developed Windows 8, it’s that it did so in complete isolation. Otherwise, it’s hard to imagine that these types of user interface lessons wouldn’t have already been implemented in the operating system.

Microsoft plans to make the Windows 8.1 update available to all Windows 8 users sometime this fall. If software identification number of this leaked version is any indication, the company is very close to finalizing the operating system already.