Laptop and desktops owners, that is users with devices where a mouse and keyboard are the only means of interacting with their apps and files, are in for a treat on April 8th. That’s when Microsoft plans to let all users start updating their devices to Windows 8.1 Update 1, a fee software download that includes a ton of small tweaks so that mouse and keyboard users find Windows 8 more inviting. 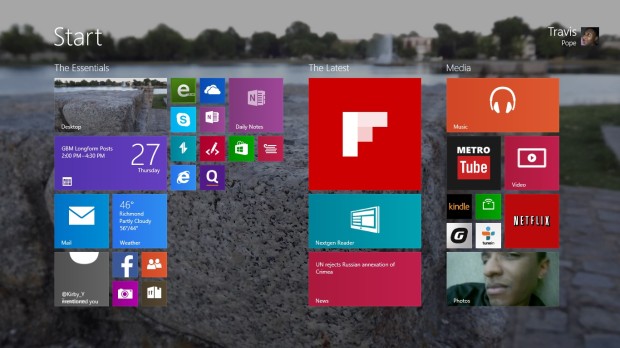 Microsoft announced the official release date and feature set for Windows 8.1 Update only moments ago at its BUILD developer conference in San Francisco. That being said, the update includes all of the features that previous leaks had indicated were coming.

Those features include changes that allow Windows 8 to effectively adapt to whatever device a user has. For example, users on a device that doesn’t include a touch screen will find that they’re automatically taken to the Desktop interface. Tablet users will still get the Start Screen interface by default.

The update also adds two new buttons to the Start Screen itself. A power button will now sit to the right of the user’s profile picture and allow them to quickly turn their device on and off. A search button will sit to the power button’s right and allow users to quickly search for things on their PC. Both of these buttons are meant to keep users from having to dive into the Charms Bar, a floating panel on the right that some Windows users had a hard time adapting to. According to the WinSuperSite, Microsoft is tying this functionality to the platform role that PC makers provide when they apply to make Windows devices. Devices that are classified as slates, like tablets won’t see this new power button since they have a prominent physical power button

Apps downloaded from the Windows Store are also seeing some changes. Each app now has a menu bar that allows users to minimize and close apps without dragging them downward with their cursor. Users will also be able to pin Windows Store apps to the Desktop’s taskbar so that they don’t have to first dive into the Start Screen to access them. Finally, the PC Settings and Windows Store apps are now pinned to the Desktop by default so that users see them no matter where they are.

Windows 8.1 Update 1 will be free to all Windows 8 users. Reportedly, Users who haven’t yet updated to Windows 8.1 will need to perform that upgrade first and then Windows Update will automatically installed Update 1.