As screenshots from Windows 8 circulate around the ‘net (round-up at Notebooks.com), I feel as if I am unable to appreciate the new elements being introduced because I’ve seen them before. They were already introduced five years ago. By Microsoft. On tablets. What’s being called “Immersive”, I call Origami 3.0.

For those who don’t know, Origami was a delightful user interface overlay from Microsoft that attempted to make UMPCs more touch-friendly. It included a tiled interface to quickly access PIM data, such as calendar and contacts, and messages, such as email, not to mention things like weather and notes. The web browser launched fullscreen and had a single bar of navigation and control buttons. In other words, it had all the stuff that we’re now hearing about in Windows 8.

This side-by-side shot of the web browsers shows the nav bar cleaned up and moved to the bottom.

Here you can see the original tile interface in Origami, a clear precursor to the Metro interface. 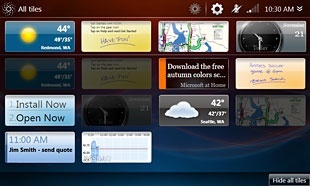 If Microsoft went back to the drawing board on Windows 8 tablets, well, they didn’t go back to a clean one.

Don’t get me wrong. I sincerely believe Microsoft can and will improve upon the original Origami Experience. But here’s the thing: why exactly should I believe this tablet strategy will succeed this time? It worked so well the first time that Microsoft killed off the project two years ago after a 2.0 release for Vista and never updated it for Windows 7. You might have read this through Origami 3.0 if not for that. I might have written this through Origami 3.0 if not for that. What part of that would inspire me to believe that a tile-based “immersive” interface will make Windows 8 a success on tablets? That’s the question not being answered for me as Microsoft pursues their “insane” tablet strategy. I’d be happy to get Origami 3.0 in Windows 8, but I’ve already been using Windows tablets. Where’s the draw for everyone else?