Joanna Stern at This is My Next… managed to grab a couple minutes with Michael Angiulo, VP of Windows Planning, who himself was able to grab a prototype tablet running Windows 8 on a quad-core NVIDIA Tegra 3 Kal-El ARM processor. The brief bit of demo is impressive in that you’d never know it wasn’t Intel inside.

Yeah, it doesn’t look like anything special, but that’s what makes it so special. The Samsung tablets handed out at BUILD run Intel Core i5 processors, which run the current versions of Windows just fine. No questions about performance there. Despite the overall excitement, that didn’t exactly assuage doubts about Microsoft’s plan to make Windows 8 work on ARM. Well, it looks like those doubts can now be settled. 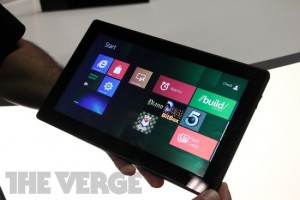 Not only did Angiulo show off the performance in Metro, but he also gave a peek of the desktop interface with Windows Explorer popping up with a tap (or two). Though noted as being slightly lagging behind the performance on the Samsung tablet, it certainly shows that it can do the job (likely without fan noise). That NVIDIA’s quad-core Kal-El system is not yet released also explains why Microsoft chose to go with Intel for their handout.