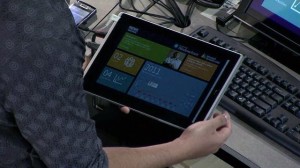 BGR has shared three photos of a slate tablet running Windows 8 at a Microsoft Worldwide Partner Conference presentation on Tuesday. The photos show what appears to be the Metro-inspired “Immersive” interface, the touch-based UI Microsoft hopes will rejuvenate their tablet efforts.

No earth-shaking revelations from these finds. The hardware is being called a “concept” and it appears to be little more than a generic model built for demonstration and testing purposes. In fact, it looks like there are three cables plugged into the side, suggesting that it may not be a Tablet PC, but a touchscreen display attached to a separate computer running Windows 8.

At first glance, it looks like the black cable just below the white one is plugged into the phone just to the side, but zooming in and comparing to another photo, that appears to be an optical illusion. Tap over to BGR to check out the other two photos.