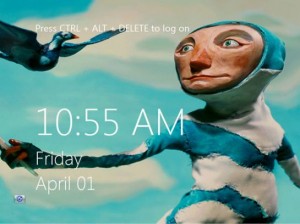 Well, Microsoft took the wraps off their touch tablet strategy yesterday and if I had to describe the effort in one word, it would be “impressive”. They addressed several key problems with touch in Windows, including my main one. But there’s a rub that we old schoolers may not like and still unknown is how far they intend to go with it.

First, outstanding job by both Adam and Chuong for the coverage yesterday. If you haven’t already checked it out, please read Adam’s report on the software and Chuong’s of the new hardware requirements. Both ends of the story are vital to understanding how the interface comes together. Really great info from both.

My biggest gripe about touch in Windows has been cursor control. Others have disagreed, but I have long insisted that controlling a pinpoint cursor with a wide finger is highly ineffective. Thus, I am quite pleased to read that Windows 8 will implement “fuzzy hit targeting” to bridge that gap. With this key obstacle overcome, I feel confident that everything else can fall into place.

It’s an overlay but an integrated one

A complaint I have about supposed touch-optimized Windows systems is the typical overlay approach in which an interface layer is slapped over the standard Windows one. On the surface, the touch interface in Windows 8 is an overlay. However, the way it is woven into the whole gives it a level of integration third-parties cannot provide. The way you can switch between the touch layer and pull parts of it in makes it part of the Windows experience, not a shroud that covers it. It really seems to exist side-by-side with the standard interface. This is a dual interface done right.

While Windows will forever be part of the PC era, just as Mac is, the new touch interface is definitely born of the post-PC era. It’s not tied down to the WIMP (window, icon, menu, pointer) interface. It doesn’t try to do everything at the expense of greatness at some things. It drops programming legacy entirely by starting fresh with current web languages. The approach is post-PC in every way. On the touch interface, Microsoft gave it a clean install. While Apple’s approach to making Macs more post-PC by bringing in iPad interface elements may be smoother and more seamless to the user, Microsoft’s dual interface approach allows the best of both worlds immediately and at once. I don’t know which is better, but I think the latter is much more daring.

As excited as I am about the touch optimization, my core loyalty is to the tablet form factor, and I’m not convinced what we’re seeing is truly designed for tablets. The landscape-only orientation is unmistakable. It’s apparent in the photos and video demo that the touch interface was designed for landscape use. Microsoft is pushing for the 16:9 screen ratio, which is as wide as can be. If you agree with Android advocate Tim Bray that tablets should be held upright, then the landscape-only approach means you have to hold your Windows 8 tablet the wrong way. Definitely touch optimized, but with equal application to both touch tablets and touchscreen monitors.

Touch optimization also is not the same as pen optimization, and it seems Microsoft is not leveraging their advanced pen technology here. That’s unavoidable to an extent since, as I know from experience and as we’ve seen elsewhere, optimizing for touch can come at the expense of pen. I’m sure pen will work the same in the standard Windows interface as it does now, but expect no magical effects in the touch interface. Interestingly, this comes as I find myself greatly appreciating the special pen features of the HTC Flyer I just received for review (realtime reviewing via my public Evernote folder). It would be a real shame if Microsoft gave up their pen advantage as Android pen tablets started taking off.

Is HTML5 and Javascript good enough?

One thing that unpleasantly surprised me was learning that application development for the touch interface will be done entirely in HTML5 and Javascript. It’s good that they’re keeping it simple, but to exclude even their own Silverlight framework is baffling. A quick check of reaction shows feelings of betrayal among Silverlight developers. Things can, of course, change in the future, but Microsoft did themselves no favors by not even mentioning that.

Not that Silverlight is necessarily the answer, but web languages alone makes it akin to a widget environment. Josh Einstein tweets: “Funny to see all the HTML/JavaScript fanboys ecstatic over Active Desktop 2.0.” (presumably referring to Windows 8 unless there was an announcement on Active Desktop 2.0 I missed.) I’m willing to see how it all works out, but clearly some developers are unimpressed.

Ultimately, my take on the whole thing is Microsoft bought themselves a second chance at a first impression. Not that most people knew anything about their previous tablet efforts anyway. But I did and I’m all too aware of the strangled advancement we saw the first time. Don’t think the lack of Microsoft Office for tablets in any of the preview stuff escaped my notice either. Seven years I’ve been waiting for real progress on that and instead I see Apple reworking their office suite for iPad and recently iPhone. There’s still a lot more work to be done by Microsoft on tablets. Windows 8 is a fresh start for Microsoft and tablets with an emphasis on “start”. Don’t let it be the end too.