All indications are that Microsoft isn’t prepared to sacrifice its future for the sake of pleasing longtime users of traditional desktop apps in Windows. On the other hand, new screenshots indicate that Microsoft is preparing to meet users who have a Desktop-interface preference in the middle with some changes in Windows 9.

According to screenshots leaked by Wzascok, Microsoft is already in the early stages of building Windows 9, the next major version of Windows that’s expected to arrive sometime in 2015. While most of the leaked screenshots don’t actually reveal anything too different from Windows 8.1, a final screenshot in the series showcases a new option to allow Windows Store apps to surface on the Desktop taskbar. 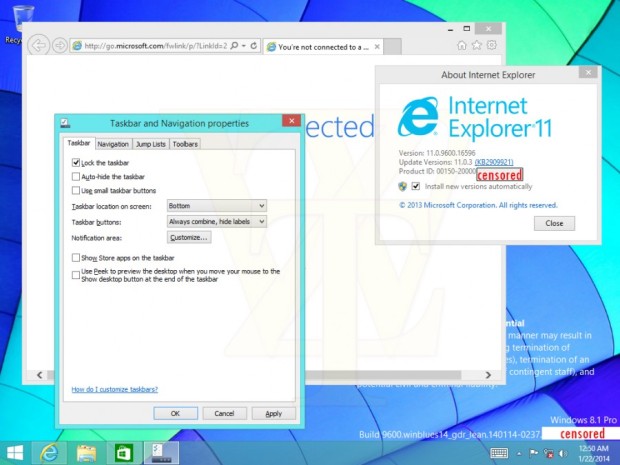 Unfortunately, it’s impossible for anyone outside of Microsoft to actually vouch for these screenshots’ authenticity. It should be noted that most Microsoft watchers are referring to Wzascok as “a well-known leaker,” indicating that he’s at least shared accurate information about Microsoft’s plans in the past.

Read: Paul Thurrott: Threshold is windows 9 and Will Ship in April 2015

These screenshots back up the rumors we’ve heard about Windows 9’s purpose. Reportedly, Microsoft will use the operating system to introduce a more refined version of the Metro Design principles and Start Screen that it introduced in Windows 8. Part of that refinement includes tying the Desktop and Start Screen systems together so that they don’t feel like two completely different operating systems.