Thinking about ways Microsoft can turn things around after getting mostly snubbed in the Google TV comparisons, despite offering a more powerful media option, I’ve come up with a few suggestions based on my own experience, starting first and foremost with touch control. 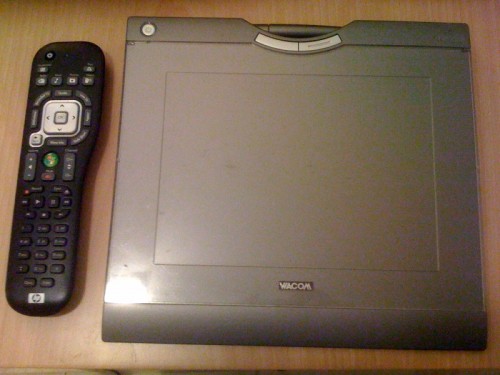 For those who don’t know, I use a Wacom Graphire Wireless to control my media PC alongside a standard remote. Works pretty well for me, but I have years of experience with pen input. I wouldn’t recommend it to everyone. Still, I think it could form the basis for a kick-ass, touch-based remote control.

First, having two separate control units is inconvenient but, to take advantage of everything my media PC can do, necessary. The remote is great when I’m in the full-view Windows Media Center, but minimally useful away from it. Meanwhile, the Wacom tablet works fine in the standard Windows view, but not as great in the WMC. My solution: put the two together.

Okay, I know I just wrote a paragraph ago that pen input isn’t for everyone, so forget it and go with multi-touch input instead, like a notebook touchpad. People are familiar with that for cursor control. On top of that, it also needs to support gestures. Directional swipes would work like the directional keypad and/or scrolling, as well as play/pause in some screens. Rewind and fast forward would work with two-finger swipes, swipe for skip and swipe & hold for extended skip. Basically, no matter how it’s implemented, a lot of button controls could be replaced with gestures.

Button replacement is the main goal here. Look at the standard WMC remote. It’s like someone looked at a standard TV remote and said “I wish this thing had more buttons”. It’s crazy. I personally would want a whole touchscreen remote with software buttons, but a gesture-based touchpad would be a more affordable approach.

Once that’s in place, web browsing in Windows Media Center should be a snap with navigation via gesture and cursor control. Typing will be somewhat limited using the alphanumeric keypad, but adequate for what you’d really need on a TV.

So that’s the main thing I’d like to see. Another idea, and this is more a personal thing, is native Blu-Ray playback support. The HP software included on my media PC can work as a plug-in in WMC, but it pops up off-center in fullscreen. Outside WMC, however, it works fine. Also can’t get to all the settings using the remote. Seems designed for cursor control.

Aside from that, there also needs to be better marketing for WMC (as in, “any”) as well as affordable systems that people can easily connect to their TVs. On the plus side, some rough edges aside, especially with plug-ins, the on-screen interface is excellent. I just need a better way to interact with that interface.