Windows Phone 7 NoDo Update Roll Out Could Take A While

If you own a Windows Phone 7 device and got excited when you heard that Microsoft’s NoDo, aka copy and paste, update was rolling out, then you probably want to take a seat because what we’re about to break to you might be a little difficult to swallow. 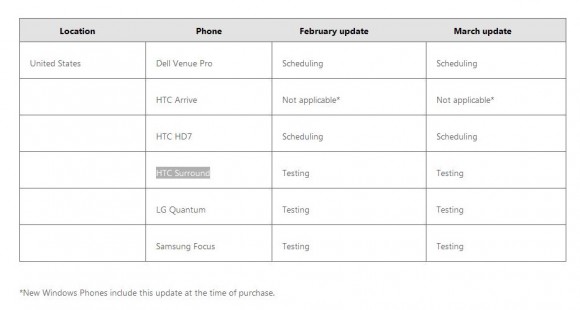 Two days ago, the update began to roll out to small pockets of WP7 users in Europe. The pitchforks probably got raised a little bit there because Redmond didn’t mention anything about a roll out to branded handsets around the world.

That is, until today, when Microsoft posted a ‘Where’s my phone update?’ schedule for their handsets which will probably make WP7 owners raise their pitchforks even higher.

One look at the list and it’s easy to predict that this roll out is going to take a lot longer than people had hoped for. The Samsung Focus, HTC Surround and LG Quantum are back in testing phase which means it could be weeks before owners see the update roll out to their phone.

That of course would push the update beyond that late March date that Microsoft gave out earlier this month.