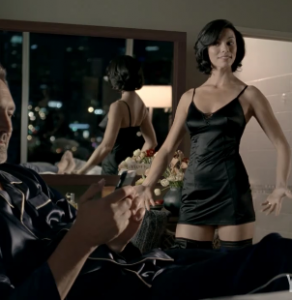 Microsoft and its partners unleashed the world of Windows Phone 7 on the masses today. In the middle of the media blitz is a gem of an ad called Really that’s surprisingly sexy and funny. Two words that I’d never use to describe the dozens upon dozens of lame Microsoft videos, ads and viral marketing attempts from the past few years.

In the one-minute ad, smartphone users are portrayed as clumsy idiots that just can’t let go of their phones. They’re shown in a number of embarrassing situations, always choosing to focus on their phones rather than surroundings. Forget about live concerts, work, your kids, a seductive wife or your own wedding. We just can’t put our phones down. The ‘victims’ in the ad exclaim ‘Really!’

A bet a lot of GBM readers (and staff) can relate to at least some of the situations in the video. I know I can.

Kudos to Microsoft for a great ad. The only thing that confuses me is the ending tagline:

“It’s time for a phone that saves us from our phones.”

Does Microsoft not think its phones will be addictive as iPhones, Android devices and the CrackBerry?