As I mentioned early yesterday, Zune software version 4.7 went live. The marketplace looks really thin, but I am not going to panic yet, the actual release isn’t here yet. Some software shown off today isn’t in the store, so I am going to assume it’s not really ready for public consumption yet. 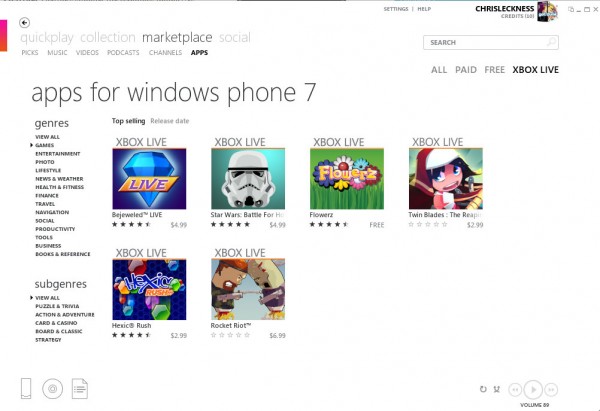 As you can see there is very little in the store right now.

I know that Microsoft is going with the quality over quantity model here, but I still think Microsoft MUST have many major apps available at launch to make it easier for those considering making the switch to leave Android or iOS with their large app selections. People will argue, but it’s all about the apps. You can say that many popular apps can be accomplished in a “good” browser, but for many, that won’t cut it. Average consumers want their apps, whether they use them or not. If Microsoft has an impressive amount of core apps that a large part of the population use, then they’ll be ok while they bulk up their app store. I talked about what apps I need already here on GBM, but many of them are already slated for Windows Phone 7, which makes me quite happy.

The only major application announcement that came out yesterday was the one from EA Mobile. This is indeed an important developer to have developing for your platform too. I am very happy myself since 60% of my iPhone games are EA Mobile, and a couple are from Astraware and the others vary. Yesterday, EA Mobile announced the following games for release on Windows Phone 7:

This isn’t going to get Windows Phone 7 over the app hurdle, but it’s a good start from one developer.

Engadget also posted a pretty good list of applications that will be available. I assume that this list was comprised of apps they actually witness or heard name dropped today in NYC. Notice that there is no mention of Angry Bird?

What is in the Marketplace currently, the 4 EA Mobile games, and the handful that Engadget posted about doesn’t equal 2,000 though. I am being a tad critical here, but apps are important in my book. Notice there is no mention of a Facebook app? That is ok, even though they could leave Facebook out and I wouldn’t cry, Facebook is deeply embedded into the OS for lots of sharing and contact integration.