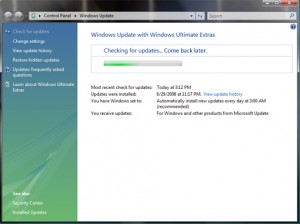 Microsoft has received a lot of publicity and positive review of its Windows Phone 7 platform, and our very own Chris Leckness has been playing with his HTC HD7 on T-Mobile since a few days before launch and has been overall satisfied with that experience. Despite the glowingly positive reviews over the user interface and experience on Windows Phone 7, the sleek designs by OEMs, and Microsoft’s ability to launch with so many apps and partners, the one thing that will set Windows Phone 7 ahead of competitors like iOS, Android, and webOS is its direct-to-user update mechanism that will be handled over the air (OTA).

Any software updates with Windows Phone 7 will be pushed out to end-users directly from Microsoft over the air to their phones. This move is a radical departure from what the industry experiences right now. Currently, with Android devices, updates must pass through manufacturers to customize and build for their hardware, and then go through carrier certification to ensure that it will work properly, and then the carriers will push the updates out to end-users either via a manual download or over the air. On iPhone, while Apple manages the update process itself, updates files are actually entire copies of the iOS build and not just divided piecemeal for the feature that is being added or the bugs that the update attempts to fix. This means that what you end up with is a huge file that can’t be handled over the air and after installing a whole OS, you have to then waste time restoring apps and personal user information on your phone. All this is avoided by Windows Phone 7’s update scheme, which takes the lengthy process of OEM customization and carrier certification out from the Android circle, and can patch parts of the operating system and not have to send the entire OS image to users, unlike on iOS.

With Microsoft committing to releasing updates to the end user, the company takes on the onus of servicing the user through various lifecycles of Windows Phone 7 and beyond. Google, with its Android operating system, has taken a lot of criticism for fragmentation of the OS environment. While Android OS is free to use by OEMs (manufacturers) and carriers, carrying no license fee, some manufacturers and carriers do not update their devices or provide updates to their devices to the latest generation Android OS, currently at Android 2.2 and called Froyo. That means that the latest security patches, the newest features, and the most cutting edge capabilities are not seen across the board on different devices and handsets.

Apple, on the other hand, had promised to provide free and timely updates to iPhone users, but the company had recently stated that it won’t update older models and some of the newest features on the latest builds of iOS don’t get ported to older model phones. This, too, creates fragmentation as an iPhone 3G owner won’t be able to experience some of the glitzy features that iPhone 3GS or even iPhone 4 owners get to toy with. iPhone envy? Well, if you want the most current feature of iOS, Apple’s ploy may be to have you plunker down and update your hardware as well, though the company’s official position is that the hardware on some older generation models cannot handle some of the glitzy features. That, however, is debatable as users who have resorted to “jailbreaking” their iPhones have found that those very features can get enabled and can still work smoothly on older models.

While Microsoft is committed to offering updates to Windows Phone 7 to current WP7-powered devices, we’re wondering what will happen when Windows Phone 8 OS gets released–would Windows Phone 7-made devices be able to get a major upgrade to Windows Phone 8 OS? That was also an issue that had plagued Microsoft when the company was actively developing and releasing its older Windows Mobile OS. As the build number increases, Windows Mobile users, like their Android counterparts, were at the mercy of carriers and OEMs to provide an upgrade path, if any, for the software side lest they bought new hardware.

The good news is that Microsoft, while marrying software to hardware, is able to provide uniform updates to all users. The company had implemented minimum hardware recommendations and requirements in its early release, called “Chassis 1.” Essentially, this means that any hardware vendor would have to conform to similar specs. This makes it easy for a larger scale OS update rollout on Microsoft’s part as there won’t be too much disparity between internal components, such as CPU, RAM, and GPU, and the updates should offer a consistent experience across all handsets. Moreover, on the other spectrum, by separating software for its part and hardware to the roles of OEMs, Microsoft may be able to handle and service users more effectively. The company can either roll out updates freely, or charge for a Windows Phone 8 OS license to current devices when the next-generation OS comes out and provide a natural upgrade path like on desktops and laptops.