Windows Phone 8 is the latest smartphone to earn celebrity endorsements from Cam Newton, Jessica Alba, Gwen Stefani and Will Arnet.

Here’s a closer look at the smartphones these celebrities think are worth putting in your pocket for the next two years. Each Windows Phone 8 ad shows off a different feature of the phone, and how the celebrity uses it to do more.

Cam Newton shows off his culinary skills with Live Tiles and the ability to create a Tile specifically for one contact, in this case his mom. Jessica Alba focuses on the Kids Corner, a feature that lets her control what her kids can use when she hands off her Nokia Lumia 920 Windows Phone 8 smartphone.

In the ad below, Gwen Stefani shows the Outlook integration and expanding Live Tiles, which offer a look at your inbox from the home screen.

The first wave of Windows Phone 8 devices is now available in the U.S. AT&T, Verizon, and T-Mobile each have at least two devices including at least one high-end model and one mid-range model. There’s still one phone that hasn’t come out yet, but every other phone is available now.

All of the phones that are available now use the same dual-core 1.5GHz Snapdragon S4 processor, which means the main specs that separate the high-end from the mid-range phones are screen resolution, RAM, and storage space. Windows Phone 8 offers a somewhat wide range of device options compared to Apple, but there isn’t as much differentiation as there is with Google’s Android platform.

Not to be left out, Will Arnet is pitching Windows Phone again, and with Windows Phone 8 he’s on the hunt for a new personal assistant to hold his Lumia 920. 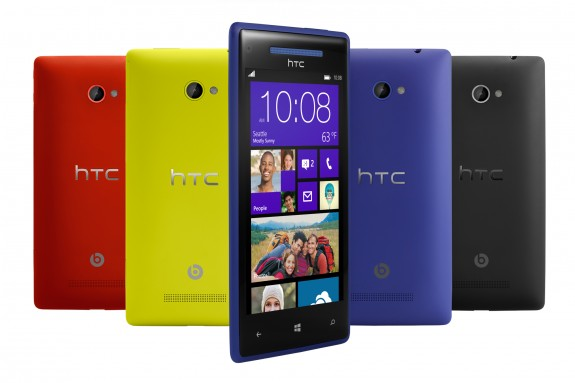 The Windows Phone 8X by HTC.

The Windows Phone 8X by HTC is the only Windows Phone available on three major U.S. carriers, not including Sprint. As Microsoft’s “signature” phone it’s the one that Microsoft pushes most often. The phone has a 4.5-inch 720p display, uses a 1.5GHz dual-core processor, and has up to 16GB of storage space. Like other recent HTC smartphones the Windows Phone 8X has an ImageChip for better photos, and Beats audio for enhanced sound. 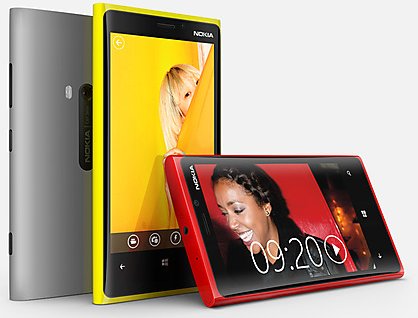 The other flagship Windows Phone 8 device in the Nokia Lumia 920, which is currently only available on AT&T. The phone features a 4.6-inch display with a 1280×768 resolution, 16GB of internal storage, and a dual-core 1.5GHz processor. The big draw for the Lumia 920 is its PureView camera. While the device doesn’t have the oversampling of the 808 PureView the camera in the Lumia 920 does take photos in lowlight conditions where most phones can’t get photos.

In addition the PureView camera the Lumia 920 offers wireless charging and has exclusive apps from Nokia. These include apps like Nokia CityLense, Nokia Drive, and Nokia Transit as well as apps like ESPN and timed exclusives like Zynga games.

See why Jessica Alba likes the Nokia Lumia 920 and Windows Phone 8, with Kids Corner, in the ad below. 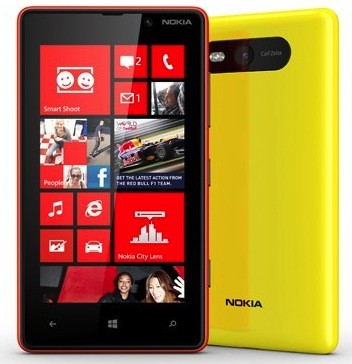 The Lumia 820 is Nokia’s mid-range Windows Phone for AT&T and most global carriers. It features the same 1.5GHz dual-core processor as the high-end phones, but its 4.3-inch screen only has a resolution of 800×480. It has 8GB of storage and an 8MP rear-facing camera. It’s stand out feature is the replaceable back plate.

Users can freely change the backplate of the Lumia 820 to charge the color of the device and to add wireless charging.

The Nokia Lumia 820 is now available on AT&T for $50 on a two-year contract, but savvy shoppers can buy the Lumia 820 for a penny on Amazon. 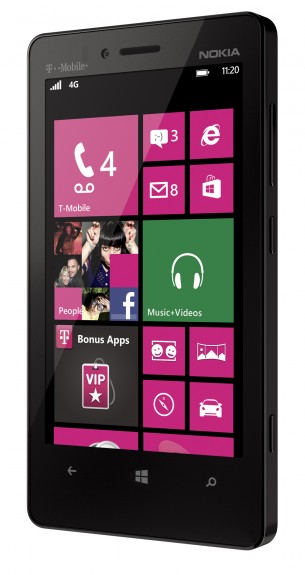 The Nokia Lumia 810 is essentially the same phone as the Lumia 820 but with a different design. It has the same specs as AT&T’s phone, except that it runs on T-Mobile instead.

The Nokia Lumia 810 comes in either black of cyan and is available now and typically costs $150 on a two-year contract with T-Mobile. 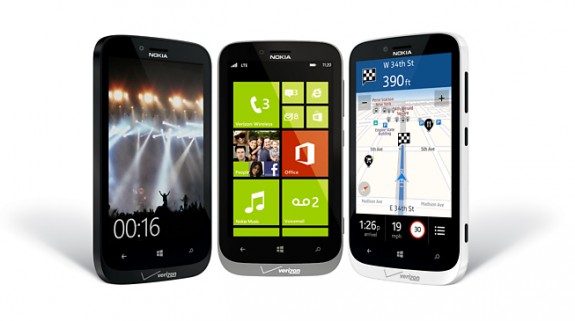 The Nokia Lumia 822 is the Verizon variant of the Lumia 820. It has a more drastic design change than the Lumia 810, but it still uses the same 1.5GH dual-core Snapdragon S4 processor and has the same 8GB of storage with a microSD card slot. Unlike the other variants, however, the Lumia 822 has Qi wireless charging built in.

Verizon offers the Nokia Lumia 822 in black, grey, and white and it costs $99.99 on a two-year contract.