We’re getting closer to the debut of Windows Phone 8 devices on Sprint’s “Now” network, that’s according to a new “Coming Soon” page that made its debut this week on the company’s website.

According to Sprint, smartphones paired with Microsoft’s latest mobile operating system are heading to store shelves for its users sometime this summer. Unfortunately, Sprint isn’t announcing any details on what two devices users can expect or at what price points they’ll be offering them.

Sprint previously announced that they’d be adding Windows Phones to their lineup during Mobile World Congress 2013. 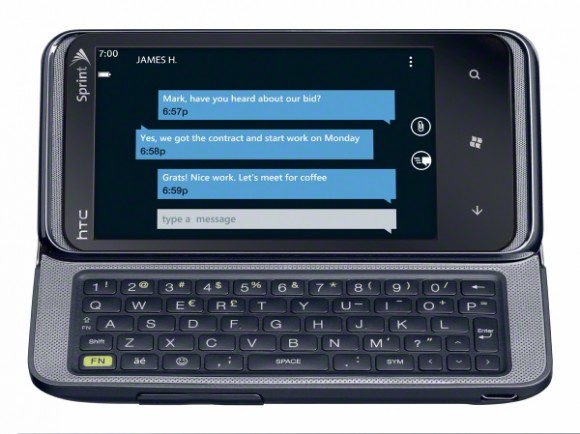 The last Windows Phone to go on sale to Sprint users, the HTC Arrive.

Though it’s not as exciting, this coming soon page also highlights the new marketing approach Sprint is taking to differentiate itself from competitors who carry the exact same devices. As it does with Apple’s iPhone, Sprint seems to be banking on the fact that its Truly Unlimited plans will help its Windows Phones stand out from the crowd. It also tries to highlight the relatively close relationship between Windows Phone 8 and Microsoft’s other consumer products like the Xbox 360, Microsoft Surface, and Windows 8 based PCs.

The nation’s third-largest carrier, Sprint has a somewhat checkered past with Windows Phone in general. The carrier launched their first Windows Phone based device, the HTC Arrive back in 2011. Though the device was one of the few in the American market to make use of a slide-out qwerty keyboard, it’s relatively modest hardware specifications for the day and new operating system made it one of the least purchased smartphones in Sprint’s line up for its entire lifecycle. During Sprint’s CES 2012 announcement of its lineup of LTE devices, Sprint’s Vice President of product realization David Owens went so far as to directly call out Windows Phone to PC Magazine,

“We have a Windows device in our lineup, but honestly, it hasn’t done well enough for us to jump back into the fire. We told Microsoft: You guys have to go build the enthusiasm for the product. We’ll train our reps on why it’s great…[but] the number-one reason the product was returned was the user experience,”

We’ve yet to hear anything from any of Sprint’s executive team on what attributes Microsoft added to the Windows Phone 8 operating system that caused them to reconsider their position.  There have been no leaks of new devices that could be one of the two devices Sprint plans to launch however, HTC’s Windows Phone 8X is already available on AT&T, T-Mobile, and Verizon –the latter of which uses the same radio technologies as Sprint. In theory that would make it an easy sell for a network who wants to get back into the Windows Phone game but isn’t sold on the software’s ability to delight customers.