Windows Phone 8 Lockscreen Will Have a New Look?

In addition to a fresh and new Start screen on Microsoft’s forthcoming Windows Phone OS that’s expected to debut this Fall, it appears that the mobile operating system will also get a re-imagined lock screen as well that will provide users with more information about notifications. While there aren’t much details about how this new lock screen will look, Windows Phone-centric blog WP Central claims is reporting that the new lock screen will help Microsoft match some of the notification center features that are present in rival platforms iOS and Android, but done in a way that’s unique to Windows Phone.

A few weeks ago at the Windows Phone Summit where Microsoft revealed more information about its Windows Phone 8 plans to the public, the company showed off some slides and videos. Of note is how the mail notification looks. 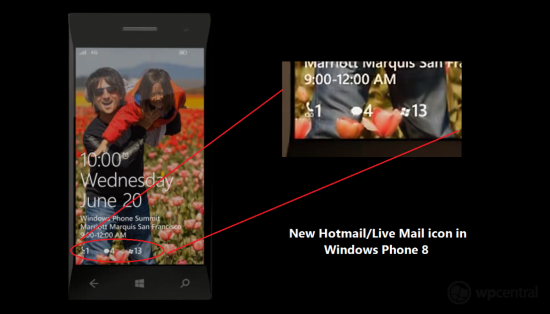 Rather than a generic mail inbox, it appears that Microsoft may use custom notifications for the type of emails you have, and we may see a Hotmail/Live inbox notification as well:

…the new Hotmail/Live mail icon which ironically is the old Windows flag logo (yet the new logo is clearly used for the capacitive button). To be honest, we think this is just a mockup oversight and we have no idea if Hotmail/Live mail would use the old logo though we’re leaning towards ‘no’ on that one–in other words, nothing to see here.

According to site, Microsoft will be giving developers access to the lock screen. Rather than having a notification drawer for notifications like on Android, or a Notifications Center like on iOS, developers can tap into the lock screen to display any messages that may be important to their apps and the user. WP Central isn’t being forthcoming with details, but it does appear that something is brewing within Microsoft for an updated lock screen experience:

There are actually four options for developers to choose from with one of them being extremely creative as it will give you a fresh look to your Lock screen numerous times a day. We won’t say much more on the matter for fear of raising Microsoft’s ire but hopefully this tease will get you excited for what’s coming in Windows Phone 8.

When Windows Phone 7 debuted, Microsoft had marketed its Metro tiles-based UI as innovative, fresh, and different. Hopefully, it can re-create the same kind of magic again.