According Microsoft, only Windows Phone users were able to purchase the game from today. Meaning users of iOS and Android devices had to wait just a bit longer before they can destroy bricks and complete levels with special Star Wars themed birds and opponents.

Users can download the game right now for just $.99. While that price is consistent with add-free versions of Rovio’s past games in the franchise, it’s considerably lower than what Windows Phone users are used to. That’s especially true since Angry Birds Star Wars 2 comes complete with Xbox LIVE achievements. Typically, Xbox enabled games cost as much as $6.99 on Windows Phone. Users can give the game a try with a free trial before buying too. 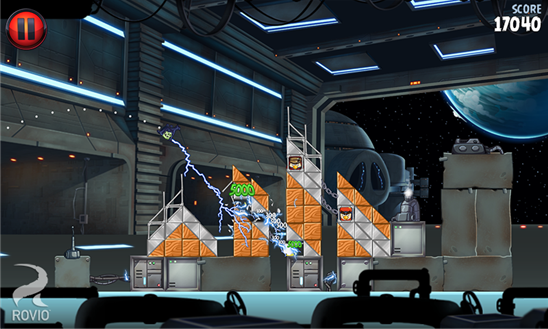 One of the levels from Angry Birds Space 2.

As for the game itself, developer Rovio has opted to not fundamentally change the game in huge ways. That is, the object of the game is still the same: to eliminate the pigs using good timing and unique character abilities. Users have 30 distinct different characters at their disposal this time around, including franchise legends like Yoda, Anakin Skywalker, Mace Windu and more.

Those who prefer to choose their own destiny also can play as a member of the Pork Side; that is the Dark Side as Darth Vader or Darth Maul.