Before filing for an IPO Facebook made quite a few changes to its service, and many of them have taken a long time to reach mobile apps. Today some of those new features have come to the Windows Phone Facebook app thanks to a badly needed update.

The Windows Phone Facebook app still follows the Metro design language that Microsoft developed for the platform, but it manages to pack more features into the layout, and make it look a lot nicer. The new app now has the Facebook “jewels” that inform users of friends requests, messages, and notifications in the top left corner of the app, making them easily available no matter where you are in the app.

Along the top of the app is an optional banner image, which seems to populate with images that you’re tagged in. Thankfully you can turn it off to turn the banner Facebook blue if you don’t like the photos it chooses, or you can just keep refreshing it until you get a combination you like. 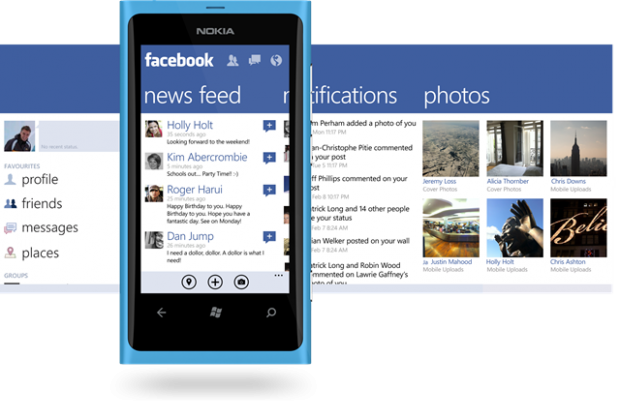 Unfortunately the app still lacks some basic Facebook features. You’re still unable to use the app to tag photos, and you still can’t like individual responses to statuses. Timeline is also missing, though it does seem like it would be a difficult feature to put into the MetroUI.

Overall, the new Facebook app for Windows Phone is a big improvement. It looks a lot nicer, and works better as well. Scrolling isn’t as choppy as it was in the last version, and the new lists filters are a welcome addition. It’s still lacking some of the features of the iPhone and Android version (namely Timeline), but the app shows off the great design that’s possible in Windows Phone even without them.