One of the features that enterprise-class and consumer users were asking for when Microsoft had debuted Windows Phone nearly a year ago was the ability to tether or share the phone’s Internet connection with a laptop through a feature called mobile hotspot, and now it looks like the Redmond, Washington maker of Windows Phone will be delivering that feature in its forthcoming Mango operating system release. 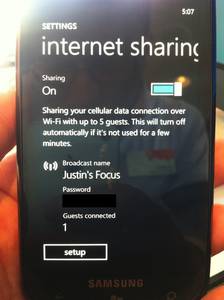 A Samsung Focus Windows Phone 7 device flashed with the Mango software update is shown with the Internet Sharing feature and the ability to share the device’s cellular data connection over WiFi with nearby devices. The good news is that Microsoft is improving Windows Phone 7 as a platform with features that users are requesting. The unfortunate news is that the feature may be limited as it would require carrier approval and would most likely come at a cost of an optional tethering plan add-on to a user’s monthly bill.