The number comes from All About Windows Phone which claims Microsoft has passed 100,145 apps in the Windows Phone Marketplace after just 20 months. Although developers published more than 100,000 apps to the Marketplace, there’s only 88,371 apps live in the store.

Previously, Microsoft took 14 months to reach 50,000. It took just a few more months to double that figure, which is quite impressive. 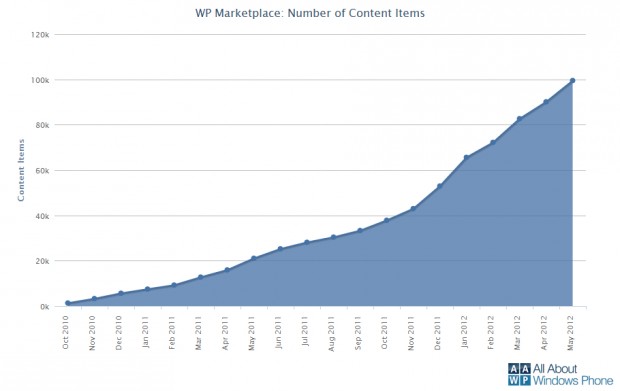 The single largest app category in the Windows Phone Marketplace is Entertainment which has 18,867 apps. The next few categories are Tools and Productivity (14,591 apps), Books and Reference (12,816 apps), and Games (12,212 apps). The numbers are quite surprising as games tend to dominate other platforms, especially the iOS App Store.

The single biggest influx of apps is from single eBooks, which is quite depressing. There are a lot of single eBooks in the Marketplace, and most of them aren’t very appealing. Despite this, Books and Reference only makes up 13 percent of the Marketplace.

Of the apps available, 67 percent are free. Another 10 percent paid with trials, and the last 23 percent are all paid apps.

The Windows Phone Marketplace still has a long way to go before it catches up with iOS and Android. With any luck Nokia’s Lumia devices and Windows Phone 8 will make the platform more enticing for users which should make it more appealing to developers as well.