Let me preface by saying that despite owning more Apple products than the average Apple Fanboy, I dislike Apple.

I respect Apple’s innovation of existing technology and their knack for getting the general public to buy in to their products. Their ecosystem is unparalleled and their fans are very passionate. For those reasons alone, I don’t buy a recent report from IDC that predicts that Windows Phone/Windows Mobile will over take iOS by 0.2% in 2016.

In IDC’s Worldwide Quarterly Mobile Phone Tracker report released yesterday, they predict that iOS will have a 19% market share and Windows Phone/Windows Mobile will have 19.2% while Android will continue to blow them both away with 52.9% of the world-wide market share. 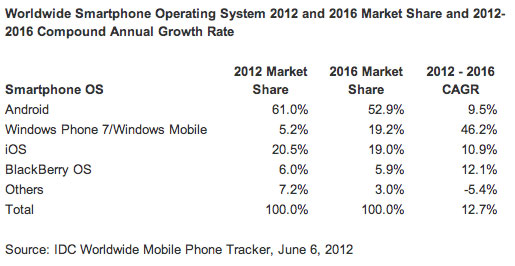 According to the press release I found on TechnoBuffalo, IDC is predicting this surge for Windows Phone to occur over the next 4 years. It’s safe to say that Microsoft has no plans to give up on the mobile game, but with the way they are quick to shift focus, I am not sold on their long-term commitment to Windows Phone. The Kin isn’t a good example, but look at the Zune’s demise. With 4 years ahead of us for this forecast to come true, Microsoft could abandon Windows Phone altogether. I am not saying they will, but I definitely don’t have the faith in Microsoft I had several years ago. A lot can happen in 4 years.

Looking at the chart, Microsoft would gain the 15% market share by stealing Android users for the most part. The inexpensive Android phones that are basically today’s feature phone are allowing a cheap entrance into the smart phone arena for those that are coming from feature phones. Microsoft appears to see that and with the changes coming, seem to be following suit.

There is no doubt that Nokia’s marketing and good name have helped Microsoft and Windows Phone tremendously over the last 6-9 months, but is it working? Will the spike in growth due to hip marketing and extremely aggressive pricing continue? Will it be enough to allow Windows Phone to continue to grow? Will it be enough to make up 15% in the world-wide market share by 2016?

I don’t think so.