Microsoft will launch Windows Stores inside many of the Best Buy locations scattered across the United States in an effort to bolster their direct outreach to consumers.

The move, which was announced this week by Microsoft’s Brandon LeBlanc on the company’s Blogging Windows area of the Windows website, will make its way to 500 Best Buy locations in the United States and another 100 Best Buy owned stores in Canada.

The stores will act as sort of branded Windows area that will include as much as 2,200 square feet of space stocked with nothing but products running Microsoft’s Windows operating system including Windows 8 and Windows RT machines, Windows Phone handsets and of course, the Xbox. 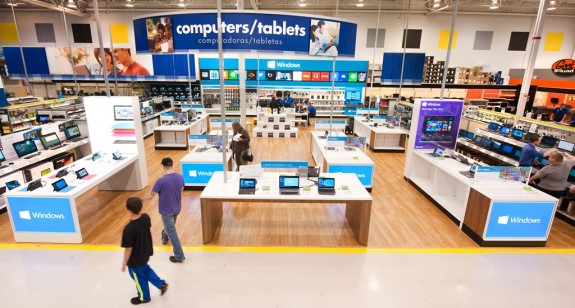 The Windows Store inside of a Best Buy.

Microsoft also says that these stores will stock a range of accessories and software that should help alleviate the pain of users having to search website’s, or head to the company’s online store to find the best accessories for their Surface tablets and Windows convertibles.

Read: Microsoft Will Have 44 Microsoft Stores by Mid-2013

The addition of these Windows Stores will give the company a reach of 648 different retail locations across the world, and help improve the company’s woeful retail experience story. While it’s likely that all of these locations already showcase Microsoft’s products already, these areas tend to be understaffed and include product demos that no longer function or staff who aren’t very informed about Microsoft’s offerings.

If the approach sounds familiar, it’s nearly identical to the small Apple areas that many Best Buy stores now include.

Microsoft says that these new stores will begin to appear at Best Buy beginning later this month, and expects to roll them out to locations into September. Best Buy has already added a Windows Store area to its website.