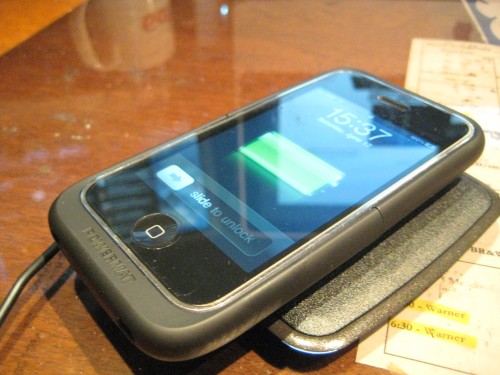 Market research firm iSuppli (via Slashgear) claims the wireless charging market is set to expand by a factor of 65 by 2014 with more than 200M units shipping by then. Are you charged up about the possibility, or is that too early to cut the cord?

I was in the latter camp as the current wave of wireless charging solutions emerged. I started to warm up to the idea after seeing a Palm Pre Touchstone turned into a car mount. Later, I checked out wireless charging stations with Amy at CES. Most recently, I’ve been further swayed by Warner’s review of the Powermat charging system. Now I have a pretty good idea how wireless charging would fit into my routine.

Overnight wireless charging seems like a waste of the technology to me. It takes little more effort to plug in, sleep for 6-8 hours, then unplug, than it does to do the same except with a charging pad. A better use would be in a situation where I pick up my device on a regular and repeated basis, like at work.

At my desk, I use a speaker dock to play music and keep my iPhone charged. Even on a slow day, I’m plucking my phone from the dock every couple of hours or so. I’m considering a Bluetooth adapter, like the one I use in my car, allowing me to pick up my iPhone without breaking the audio connection. However, streaming music via Bluetooth on top of receiving it from Pandora over 3G is a serious power drain. And that’s where wireless charging can save the day. Just slide on the charging case at work, drop it on the pad whenever it’s not in use, and I can use my iPhone tied to anything while at work.

Another possible use would be in the car, like that guy did with his Palm Pre Touchstone except I’d go with a cup holder mount or something similar. On a busy day out, I might be streaming music and checking maps with GPS, which is a triple whammy on power consumption. Easy enough to plug in, I know, but if I’m making a series of stops, that could be a lot of plug-unplug repetition.

Ultimately, wireless charging is a convenience. If it was a mission critical necessity, HP wouldn’t own Palm. But is it a worthwhile convenience? Not for overnight charging, but at work and on-the-go, I can see it being useful. If the market does boom to 200M units by 2014, I think I’ll be part of that group. How about you?