In an effort to create slimmer, sleeker, and smaller products, Apple is hoping to make the SIM card as small as possible. The company had done that once already, migrating from the traditional SIM standard to the micro SIM format, which is now being employed on the company’s iPhone and iPad as well as rival products such as the Samsung Galaxy Nexus and the Nokia Lumia 800. Now, the company wants to take the micro SIM even smaller and is proposing a nanoSIM standard, a move that is being met with opposition from industry veterans and heavyweights, such as Nokia, Motorola, and Research in Motion. 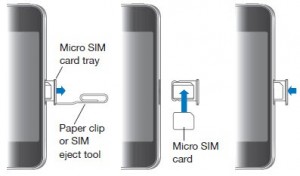 However, it appears that Apple wants to outdo itself once again and the company is proposing the nanoSIM standard now to the European Telecommunications Standards Institute, or ETSI. ETSI is slated to take a vote on the new proposal and decide the fate of the mobile future on March 29, a decision that was delayed from late last year according to Giesecke & Devrient, which makes SIM cards.

Most companies are not speaking publicly for or against the standard that Apple is proposing, but a Nokia-led effort, backed by RIM and Motorola, is opposing Apple’s proposal. Nokia itself has a competing nanoSIM proposal that’s different than Apple’s but encompasses the same goals of having even smaller SIM cards moving forward. It’s the issue of Blu-Ray v. HD-DVD all over again, but with SIM cards and for your mobile rather than for discs for your HDTV.

The benefit of smaller SIM cards is that it will take up less room and allow for either thinner or smaller devices, or for larger batteries and more features, like LTE radio and other technologies. NanoSIMs will be 30 percent smaller than micro SIMs and the thickness will be reduced by 15 percent. When compared to traditional SIM cards, nanoSIM will be an impressively 60 percent smaller.

Perhaps, even more important than the two proposals being submitted is the issue of licensing. It’s unclear how Apple will handle licensing the new standard if its proposal wins, something that Nokia is probably more concerned about. In the end, ETSI could either back one proposal, none of the proposals submitted, or both proposals.