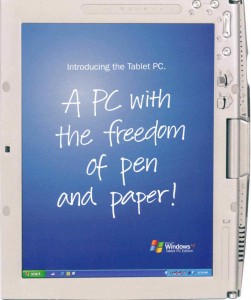 The Tablet PC  OS platform from Microsoft…anyone remember that?  It was that great operating system from Microsoft that had all the tablet functions we were all clamoring for?  Its that other system…you know, the one that isnt from Apple.

Microsoft never really put its marketing muscle behind Tablet PC.  It was just there.  Tablet fans are the ones who still talk about it and use it on their devices. Its one of the things this blog was built on.

But then, Microsoft decided to incoporate Tablet PC functionality into Vista. Ok, this was supposed to be a good thing.  Get the idea out there to the mainstream. Get people excited about it. After that, the functionality was added into Windows 7.  The idea of the Tablet PC OS shifted. It became more a touchscreen type OS versus a stylus/e-ink OS.  It looked like the end was near.

And then, this was posted:

So, what does this mean?  Well, the blog is gone.  The OS is part of Windows 7. It looks like its time for a small private service and a good old fashioned wake.

Goodbye Tablet PC.  We will miss you.