With Ultrabooks, Notebook Manufacturers Turning Away From Tablets

After the netbook market had stagnated, traditional notebook manufacturers are renewing their efforts in that space with the rise of the Ultrabook form factor, which is said to deliver a higher profit margin. The latest report from DigiTimes says that many notebook-makers are leaving the netbook space to Taiwanese manufacturer Acer and Asustek, and are shifting their attentions from tablets to Ultrabooks.

After the hype with Android tablets following Apple’s iPad debut, notebook manufacturers cooling down their tablet endeavors. Despite recent unveiling of quad-core tablets, according to DigiTimes, from Asus, both Asus and Acer are not really overly focused on the tablet market, turning their focus instead to notebooks.

As for tablet PCs, although players such as Acer and Asustek have launched quad-core tablet PCs with support of the latest Android system, these players are not paying as much attention to compete against Apple or Amazon like before and are turning their focus back to the notebook market. 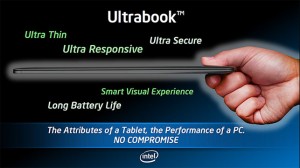 So while the tablet market isn’t quite the same as the netbook market, I think that now that the hype has died down somewhat, consumers are really asking themselves if they need a fourth screen following a PC, smartphone, and TV.  And if they do find that they desire that fourth screen, users who seek a more refined user experience will be drawn to Apple’s offering while Amazon’s Kindle Fire and Barnes and Noble’s Nook Tablet now dominate the low-cost market.

Could 2012 be a better year for the notebook industry? AMD is expected to unveil its Ultrathin platform to compete against Intel’s Ultrabooks, and the hard drive shortages should slowly start resolving itself following severe floods in Asia. Intel’s Ivy Bridge CPU and Microsoft’s Windows 8 platform are both expected to debut in 2012 to spur some growth in the traditional notebook sector.