The old stereotype that women are less engaged with technology than men is just that: a stereotype. And, according to research by Parks Associates consultants, untrue. Not only do women engage more online, they’re also more likely than men to buy “hot” tech products and use them for sharing and consuming media.

The study says that once women buy a product, be it a smartphone, tablet, TV or laptop, they become heavy users. Not just of the “practical” aspects of the device, but utilizing all of the features available.

As Helena Stone of ChipChick said in her analysis: “…women appreciate the efficiency and ease of use that a gadget provides, as opposed to all the bells and whistles.” 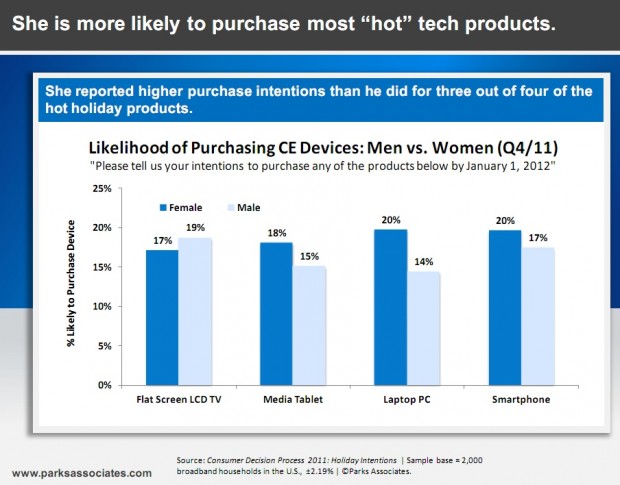 The research also points out that women are more into gaming than ever, especially after purchasing a mobile device. Don’t dismiss this just because they’re more likely to play Facebook games than men. More women own a Nintendo Wii than men and are on a par with guys in Xbox 360 and PS3 ownership.

Consumer electronics manufacturers already picked up on this trend, but whether or not they’re capitalizing on it well is a different story. Parks Associates CEO Tricia Parks notes that gadget makers are “offering their products, particularly their mobile ones, in more colors and styles with more personalized accessories” in response. While that’s nice and all, we need more than pretty colors and stylish cases to make us happy.

For instance, the HTC Rhyme was an interesting ploy to appeal tot he female demographic, but did it offer a significantly better feature set or usability over other phones on the market? Notice how the UI skin hasn’t shown up on other HTC phones? What does that say about how HTC views female consumers?

It comes down to this: women want electronics that work well, are easy to understand and use, and make their lives easier, both on and offline. Give them that and they’ll use that gadget for everything, tell all their friends how much they love it, and buy another one from the same company when it breaks or the new hotness arrives on the scene.

Give them something slathered in pink and you get what you deserve.