Word Lens for iPhone translates, erases, and reverses words where they stand

A magical app for the iPhone called Word Lens hit the App Store last week. It is a language translator that can read one language and turn it into another like others that have come before it. What sets Word Lens apart is that it replaces the words in an augmented reality manner, so that what you’re reading in one language shows up on-screen in another. But does it really do that?

Before we get into that, watch the video of the app in action so you understand what it’s supposed to do.

Word Lens is free, but it does not come pre-loaded with language packs. Those cost extra (currently $4.99) and Spanish is the only one available at launch. Furthermore, each language pack only translates one way, so if you want to translate from Spanish to English and also from English to Spanish, it’ll cost you $9.98. Of course, most people won’t need back and forth translation (if you can read both, you probably don’t need a translator), so the split makes sense.

I don’t read Spanish so I can’t judge the translation. However, Word Lens is pre-loaded with the ability to erase and reverse words from what you’re reading and that I can definitely judge. Below are four screenshots I took of the app where I used its freeze-frame option. The first two demonstrate the erase and reverse abilities with a couple of coffee table books. It works well with high-contrast text, such as white on black, but poorly after a certain threshold, as you can see with the “R” on Shelter Dogs. The second two are of the reverse ability used against the YouTube demo. 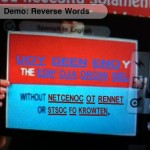 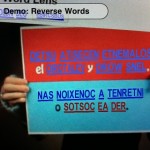 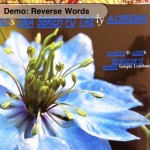 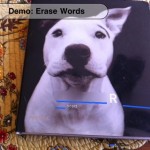 In my experience, using the app is not nearly as smooth as what they show in the video. Using freeze-frame, I did capture shots that show most of the words being reversed or erased. However, looking at it live on screen, it was rare that all words were done simultaneously as shown in their demo. Possibly that’s due to me using close-up shots instead of distant ones, but it’s not like this wouldn’t be used to translate in-hand material.

Regardless, Word Lens has solidly impressed me. Having the text translated on top of the source makes it easier to see the translation word-for-word. I can also see it being useful for situations where words are used in conjunction with symbols, such as directional and instructional signs. When next I’m in a situation where I need to read Spanish (or later in another language), I will definitely give this app a serious try.