Working with 10 Pounds of Mobile Horsepower

I’m working at the University Cafe in Palo Alto today and need to complete a video project and photo project before the end of the day for a client. I really do love small PCs, but small screens and low-voltage processors aren’t the right tools when I need to rip through several GB of AVCHD and RAW files.

Instead I brought my two primary multimedia machines for what’s going to be a long day (and probably night) at the cafe. They aren’t the lightest machines I own, but they have plenty of screen real estate and some pretty robust components. I find myself most effective when I have at least two machines running side by side. I segment my work tasks and sometimes operate two machines simultaneously. 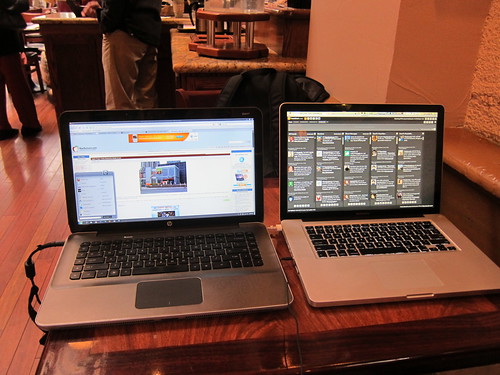 As configured, these two machines have a lot in common. They both have 15″ class displays, dual drives and nice bright displays, which are essential to video and photo editing. The Envy 15 weighs 5.18lb and the MacBook Pro weighs 5.3lb. They both have dual storage drives.

On the left side is my HP Envy 15, which I’m using to edit a bunch of HD videos for a client. It has a gorgeous 15.6″ full HD (1920×1080) display. It has more than enough horsepower to view and edit HD videos thanks to its 1.6GHz Intel Core i7-720QM processor, ATI Mobility Radeon HD4830 GPU w/1GB of VRAM, dual 160GB SSDs and 16GB of RAM. It weighs in at 5.18lb. It’s the fastest computer I’ve ever owned. I got it just before leaving for my trip to India last month and am just getting acquainted with the machine.Unfortunately, this notebook took a spill at CES and will need to go in for some cosmetic repair work in the near future.

On the right is my MacBook Pro (late 2008), which I’m using to edit photos and handle communications today. I’m keeping TweetDeck, Mail, Skype and CS4 Photoshop running on the Mac. It’s not the latest MacBook Pro, but it’s pretty fast since it has an Intel Core 2 Duo 2.53Ghz processor and 4GB of 1067MHz DDR3 RAM. What makes my MacBook Pro really scream is the RunCore Pro IV 256GB SSD that the guys from MyDigitalDiscount sent over. I rarely used my Mac’s optical drive so I installed the SSD in its place. I took out the original 320GB drive and replaced it with a 500GB Seagate 7200RPM Momentous hard disk drive, which I use as a digital dumping ground for multimedia files.

When I use both of these machines I can tear through multimedia work incredibly quickly. Yes, the combo weigh a heck of a lot more than my smaller machines, but I don’t mind hauling around the right tools for the job. I weigh 200lbs, so the 6 or 7 pound penalty compared to packing my tablet or ultraportable isn’t too much of a burden.

There are of course advantages and disadvantages of these two machines.I don’t have time to get into all of them at the moment, but here are a few observations.

The MacBook Pro’s  1440×900 display gets real crowded with menu bars and palettes in CS4. Its a shame that Apple doesn’t offer a higher-resolution display on its 15″ notebook. Considering its core of creative clientele, Apple shouldn’t reserve high-res for its 17″ MacBook Pro.

The HP Envy 15’s 1920×1080 display offers a lot more room for viewing and editing high-def content. It doesn’t have edge-to-edge glass like the MacBook Pro’s display so it doesn’t reflect as much light. One downside of the display is that it doesn’t open as wide as the MacBook Pro. This can be a challenge when using it on my lap or on lower surfaces.

Both the MacBook Pro and Envy 15 have combo audio input/output jacks, which means I can use my Ultimate Ears 5vi headset with them when I’m on Skype or Google Voice. The Envy 15 has some special circuitry and software that’s branded as Beats by Dr. Dre. Music sounds significantly crisper and clearer coming out of the Envy 15 than the MacBook Pro. I’m not talking about sorta-kinda better, the difference in audio signal is about as dramatic as using my iPhone’s stock headset vs. the Ultimate Ears.

I really like Nuance-powered voice recognition software. On the Envy 15 I use Dragon Naturally Speaking and on the MacBook Pro I occasionally use MacSpeech. Dragon is a much more robust application, but MacSpeech is still workable. The only problem is that MacSpeech requires a digital microphone, such as a USB headset.  I can use Dragon with the same headset I carry with me just about everywhere.

Both machines have buttonless multi-touch touch pads. The Envy 15 supposedly had some tracking issues, but they seem to have been solved with driver updates prior to me starting to really use the machine. Despite these updates, the Envy 15’s touch pad isn’t as smooth as the MacBook Pro’s. The Envy 15 has both a left-click and right-click area. On the surface that sounds like a positive, but it’s a hindrance. Holding a finger over the top-left corner for a few seconds disables the touch pad. I’ve done so accidentally several times.

Both notebooks have island (chicklet) style keyboards that are pretty comprable in terms of look and feel. The MacBook Pro keyboard is backlit, which comes in handy when I’m computing in the dark. Despite being a fast touch-typist it’s always nice to be able to see keys when I fumble around for the rarely used keys. The Envy 15’s keyboard is not backlit and I’m not a fan of the extra column of keys to the left and right of the standard keyboard layout. The escape key, is in the top-left corner where it belongs, but it’s about half the size of the quick-launch buttons below it. I’ve repeatedly launched Windows mail when reaching for the esc key. The bottom-left key on any keyboard should be cntrl or fn. On the Envy, the first key on the bottom row launches Calculator. I can’t even calculate how many times I’ve launched the calculator when trying to punch something else in.

They might be rated for a few hours each, but the numbers that HP and Apple advertise are always best-case scenarios when web surfing or running productivity applications. Transcoding videos and running the displays at burn-your-eyes-out brightness mean these machines would last about an hour on a single charge.

This MacBook Pro is the last model to have a removeable battery, but changing batteries on the fly can be a pain. The Envy 15 has an extended slice battery, but it still doesn’t offer enough juice to get me through a day of heavy usage.

I’ve secured a table next to a power outlet and have just left them both plugged in all day.